John Galliano has never been afraid of excess, but there’s something about the language he has developed at Margiela that simultaneously, paradoxically releases and tames it. 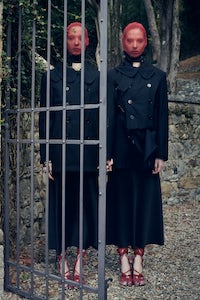 John Galliano has never been afraid of excess, but there’s something about the language he has developed at Margiela that simultaneously, paradoxically releases and tames it.

PARIS, France — There’s something about the idea of Co-Ed that always says college to me. John Galliano calls his ready-to-wear collection for Maison Margiela “Co-Ed.” Appropriate, because it offers an education, and never more so than with the two films he made with Nick Knight to go with his most recent collections. The first accompanied Artisanal in July (Galliano’s haute couture, in other words). The second launched his Spring 2021 collection on Tuesday. Both offer insights into how and why fashion happens, made even more profound by the fact they come from a designer who has, in the past, kept such public insights into his own creative processes to the barest minimum.

The films are called Sealed With A Loving Kiss, I and II, establishing the long-standing umbilical relationship between Galliano’s couture and his ready-to-wear collections, clarified here, for instance, in the way that the couture flourish of a silver applique is “industrialised” into an RTW print. While SWALK I touched on the designer’s formative years, the Blitz club and David Bowie, SWALK II tracks back to one of Galliano’s legendary research trips, when he found himself in a tango bar in a broken-down building in Buenos Aires where the steamy, secret vibe was as much a rave as anything else.

The story of the tango – the physicality, the obsession, the sense of material existence stretched to its very limits – is tailormade for Galliano. The film shows him on an early Zoom brainstorm with Nick and Charlotte Knight, rhapsodizing about Gene Kelly, singin’, dancin’ in the rain. As the 44 minutes of SWALK II unspool, Galliano’s muses tango in water, slaves to the rhythm of a furious dance marathon, collapsing at last in spent heaps, while a voice on the soundtrack sonorously intones the tragic tale of a young dancer and his love, claimed on their wedding day by the vengeful spectres of tango champions past. A blood wedding, with ardent echoes of doomed poet Federico Garcia Lorca. Also, an irresistibly dramatic virtual substitute for a physical fashion show. There can be no going back.

Galliano has never been afraid of excess, but there’s something about the language he has developed at Margiela that simultaneously, paradoxically releases and tames it. I think logic is the answer. We get to see Galliano thinking things out. It’s all there in SWALK II: the way that the building blocks of a wardrobe — a coat, a jacket, a suit, a dress — can be stripped to a fishbone skeleton, or expanded into flagrant life, with seams opened and tango frills bursting forth. Vintages pieces are dynamically collaged in a design initiative called Recicla. We see footage of the brocade for Princess Julia’s boots being woven on an 18th century loom in Venice, the exaltation of antique craft in the service of a post-modern club icon. We also see the veiled effects of the Artisanal collection (Galliano’s extraordinary effort to duplicate the veils carved from Carrara marble by Giovanni Strazza in the 19th century) rendered in wet-look muslin and tulle. Galliano is an impresario of time. It's no coincidence that I was just saying something similar about Jonathan Anderson. The grasp they share of history's art and craft is the spine of their work.

One thing that stayed with Galliano after his night at the tango rave in BA was how the dancing communicated the entire lives of the dancers. He is attempting something similar with clothing. That ambition makes more sense than ever at a time when all we may have left soon is our own stories. We were here. This was us.