NEW YORK, United States — When Michael Kors returned from his vacation this past August, he took time from prepping his Spring 2020 collection to host a trunk show.

That’s right. Kors, whose business has made him a billionaire on paper, is still on the sales floor, making time for clients. He doesn’t have to do anything, ever, for the rest of his life. And yet, he keeps showing up. This time, his big win was convincing a 20-year-old woman to buy her first Michael Kors' piece, a sharp-shouldered blazer. (He's big on tailoring right now.)

It’s a lesson for young New York designers in their sophomore slump; the ones whose brands are no longer emerging, but don’t feel destined to hit it big. For Kors, it was by no means an easy trip scaling up. Over the course of his brand’s nearly 40-year history, he went through several owners and even had to file for bankruptcy. Today, it’s now in the hands of public shareholders and facing fresh challenges, even though it generates billions of dollars a year.

“Designers who live in a bubble? It’s a disaster,” he said before his show on Wednesday morning in the Brooklyn Navy Yards. “Pretend you’re at a track-and-field event. Do not think of it as a sprint.”

It’s a good lesson for any season, but especially this one, when American fashion, and the fate of so many of its top houses, remains in flux.

This past week, there were no extraordinary clothes to speak of. But there was excitement. Kors’ spirited, star-spangled collection, with its 1940s shoulders and Fleet Week touches, was an ode to American sportswear, in all its polka-dotted, boat-shoe glory. Emotions ran high, with the pomp amplified by the Young People’s Chorus of New York City singing “American Pie” and “Somewhere Beyond the Sea.” 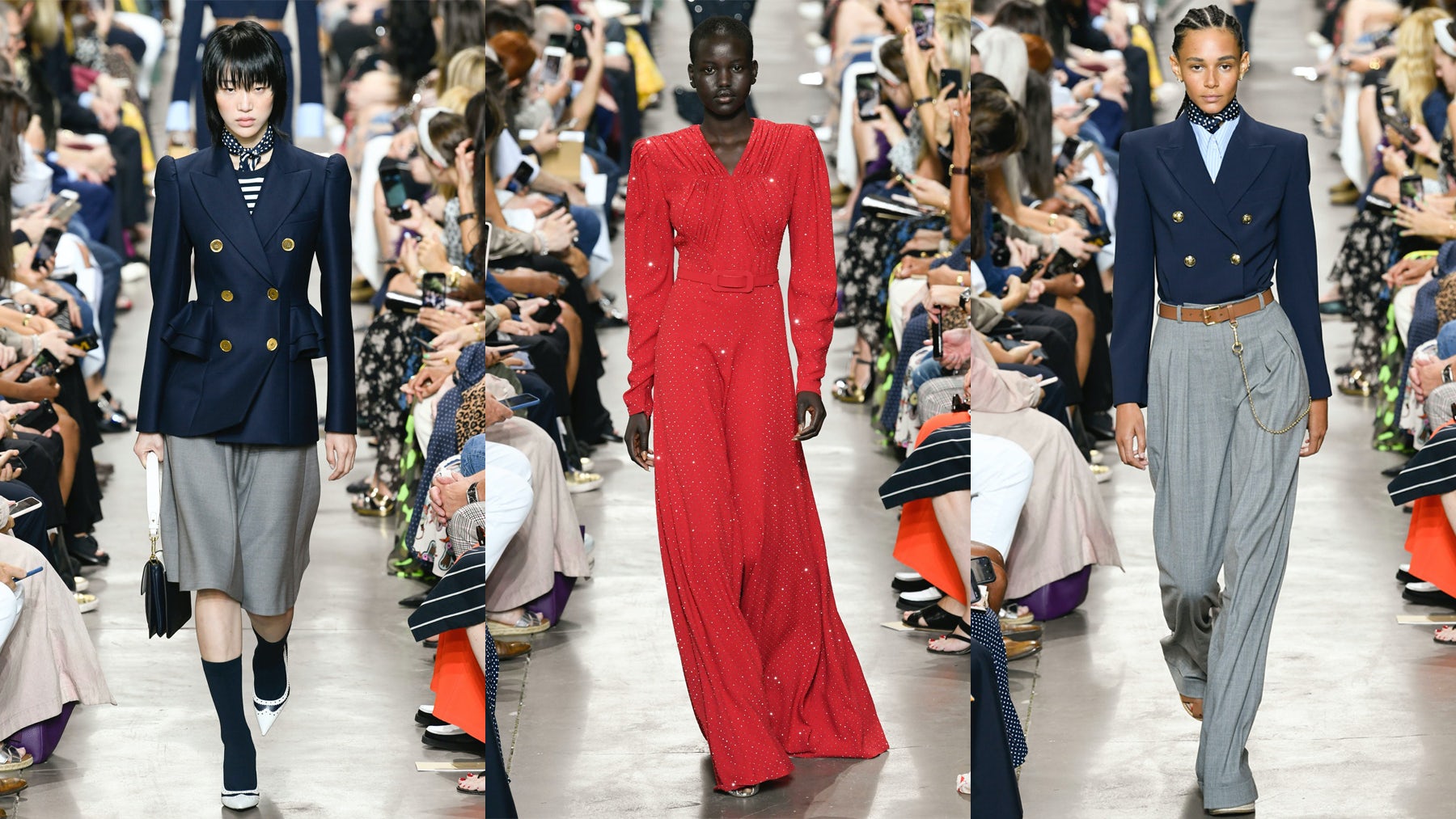 Of course, all that optimism didn’t entirely mask structural issues. The Kors brand wants to move more of its business further upmarket, but it hasn’t yet gotten the formula quite right. The bags and shoes — still often stamped with an “MKC” tchotchke — are far from irresistible. And they have to be if the company wants to make up for contracting sales in the middle market. But like Kors said, this is not a sprint. He’s still in it.

Also still very much in it, perhaps more surprisingly, is Marc Jacobs, whose label never became the billion-dollar brand that LVMH Chief Executive and Chairman Bernard Arnault once declared it would be. But that was years ago, and now Jacobs’ runway shows are back to being about the clothes.

At this season’s New York Fashion Week closer, optimism was a big word for him, too, with a collection dedicated to those lost in the 9/11 attacks 18 years ago. In 2001, his runway show took place on September 10 at Pier 54, not so far away from the Twin Towers. It was a memorable collection: the one with contrasting piped seaming that was copied rabidly by the high street. His work is less commercial now, but it has ballooned into something quite magical, the Emerald City at the end of New York Fashion Week’s yellow brick road. 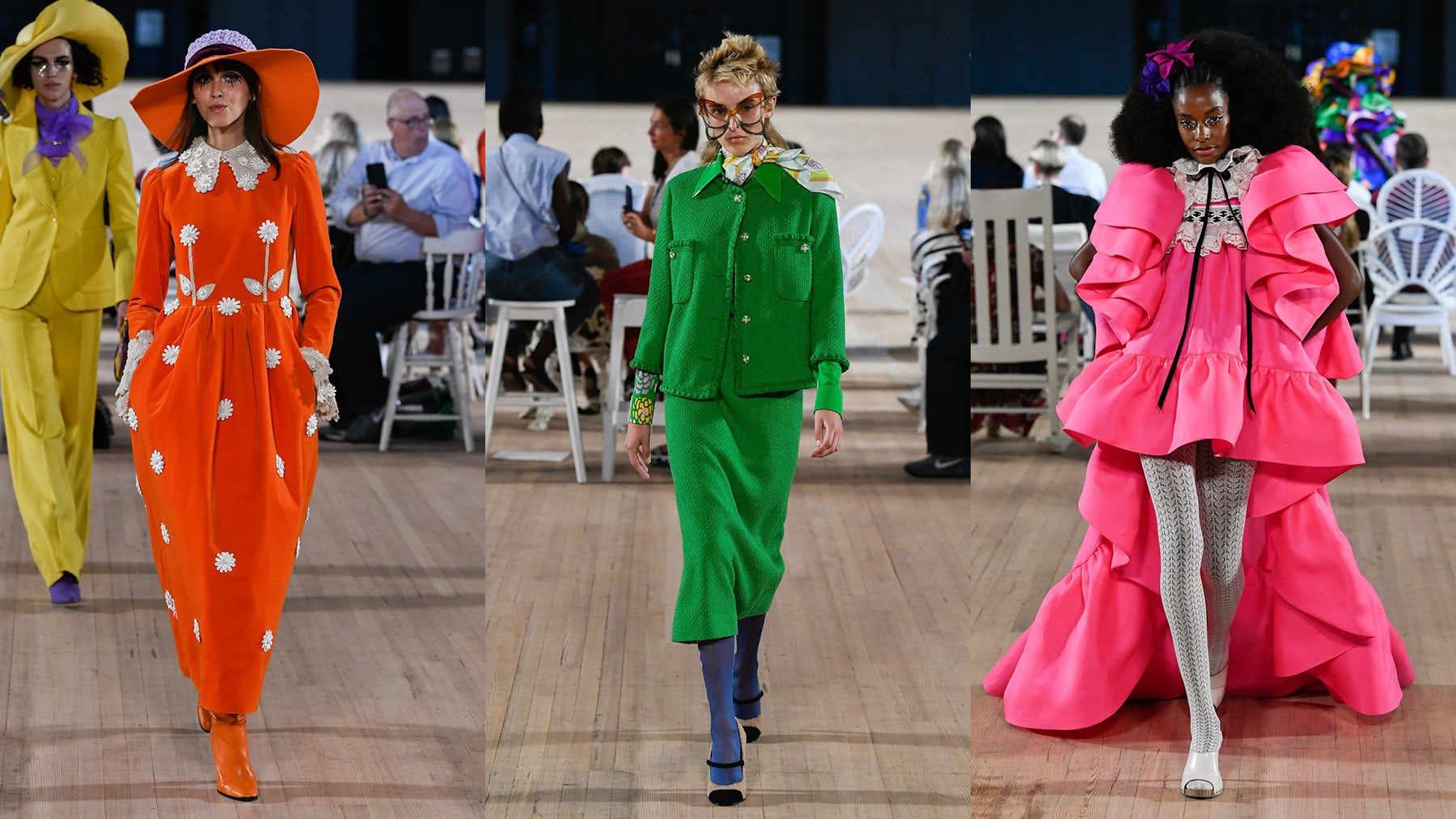 Wednesday afternoon’s set was a bit different from recent seasons, when Jacobs had lined up folding chairs or clear stools on the plywood floor of the Park Avenue Armory. This time, guests were arranged in little groups of white-washed vintage seating at the back of the long, 4-acre room. With “Dream a Little Dream of Me” blasting in the background, the whole lot of models stormed onto the floor, walking all the way up to us and then through us as if we were ghosts, looks crashing against audience members without a thought.

That was when it really started, with models showboating across the room, dressed in one-off, madcap looks, accessorised in such detail with shearling-covered Mary Janes and sequined top hats. Kors mentioned that he was inspired by St Ann’s modernist revival of "Oklahoma!" Jacobs’ collection looked like it might have been inspired, at least a little bit, by the original.

Maybe it doesn’t need to be more than that. Maybe Marc Jacobs should just stage a runway show and forget about selling clothes; let his popular eyeshadows and perfumes pay for the rest. Maybe Tom Ford doesn’t need to shill the Jeff Koons bra tops or satin running shorts he sent down the subway platform on Monday when cologne and sunglasses do the job.

For most designers showing at New York Fashion Week, though, the runway is not simply a dream. They need to sell the clothes they show. Ford, who is now chairman of the Council of Fashion Designers of America, seems to understand this, and gets a gold star for giving the industry a good kick in the rear.

His shortened schedule didn’t eliminate all the straphangers, but it did make everything feel more urgent and busy while rarely crossing over into the untenable. (Please stop complaining about Brooklyn, people!) Experiences were plentiful, from Tommy Hilfiger’s night at the Apollo and Ralph Lauren’s cinematic nightclub to kitschy handbag designer Susan Alexandra’s bagels-and-lox bat mitzvah and The Blonds’ “Moulin Rouge” takeover. And of course, there was Savage x Fenty’s night of a thousand stars, at which Rihanna seemed more than ready to steal away Victoria’s Secret’s crown.

But experiences can be empty, too. In order to get the most out of their runway, some designers are following in Kors’ stead and putting the customer first. Jason Wu, whose company was recently acquired by Chinese private equity fund Green Harbor, invited dozens of clients to his show, a straightforward set of looks made solely for them, not some bored fashion editor. Oscar de la Renta’s Fernando Garcia and Laura Kim did the same. They, along with peers like Rosie Assoulin, Wes Gordon at Carolina Herrera and Jonathan Cohen — all three former Oscar de la Renta interns — are making clothes that are happy, not too difficult. They aim to please.

There were also the upstarts with potential: Christopher John Rogers with his unadulterated flamboyance, Area with its tacky disco glamour. Other, more established labels, including The Row, Gabriela Hearst and Maryam Nassir Zadeh, remained themselves, a hard thing to do when there is so much pressure to always be more — or something else entirely.

As for real, clear ideas that go deep, those weren’t so easy to spot. With the recent exit of Tapestry Chief Executive Victor Luis, all eyes were on Coach. But while Stuart Vevers can tell a pretty story, he has failed to build a modern identity for the label. Proenza Schouler designers Jack McCollough and Lazaro Hernandez are enjoying the creative freedom afforded by a new investor but could push themselves further. Sies Marjan designer Sander Lak, another fashion darling, also left the audience wanting.

Batsheva Hay, whose Gunne Sax-sample riffs have become near-ubiquitous kooky-lady wear, intelligently created a discourse around her clothing moderated by writer and speaker Aminatou Sow, with a series of panelists — a psychoanalyst, a philosophy professor and art history professor — who “reviewed” her clothing. It was an interesting thought experiment and showed that Hay is self-aware. Whether she’ll last beyond her big moment remains up for debate, but she’s still worth watching for now. 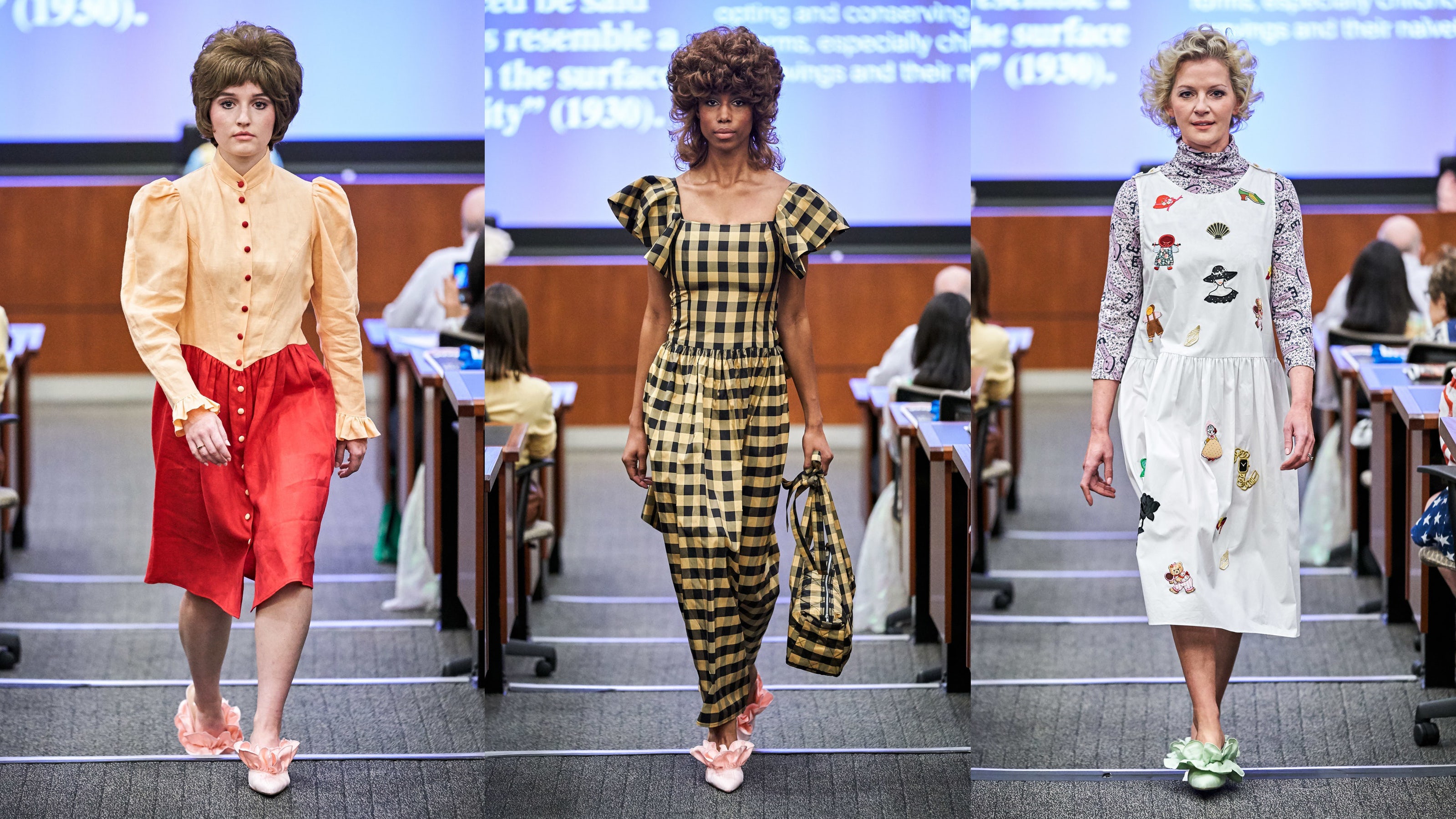 Maria Cornejo, who was recently appointed by Ford to the CFDA board, rises above them all. Consider this: While other designers are hanging on for dear life to the mutton sleeve, Cornejo took the idea someplace else, showing what she’s calling the “quadro sleeve” by engineering a sharp corner into an otherwise curved line. Cornejo doesn’t use mood boards to build her collection; perhaps that’s why it looks like none other. But it’s not the only reason she is a welcome addition to the CFDA’s decision-making body. As an independent business owner who has managed to stay afloat for more than 20 years, she can be an advocate for her peers. 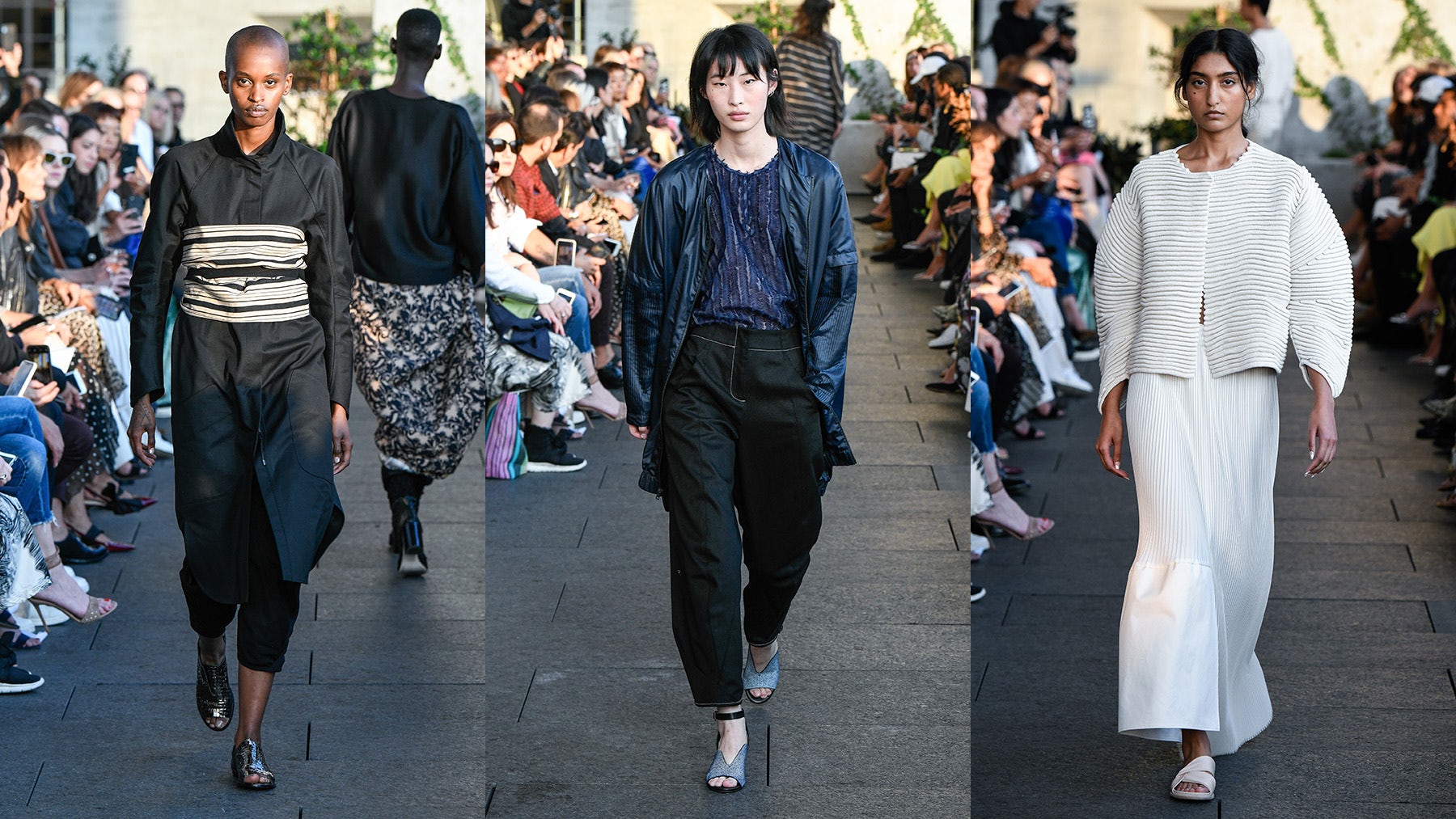 Generally, things do feel like they’re on the up. But it also just seemed like designers weren’t in the mood to think out tough things, like the threat of US recession, or that fact that the industry is still heavily reliant on discounts to keep it afloat. So many fashion greats, like Calvin Klein and Donna Karan, are gone from the runways. They are able to remain in business not because they sell expensive products in glossy flagships, but because they sell shift dresses at T.J. Maxx.

While New York understands showmanship — and customer relations — sometimes it’s hard to find meaning here. The major exception to this was Pyer Moss’ Kerby Jean-Raymond, whose Sunday show is the one that will stick with you. Yes, it was grand, and no, the clothes were not revelatory; they’re far from perfect. But if you strip it all down, take away the choir, take away the Reebok money, forget about the sermon and move the crowd out of the Kings Theatre, they still said something. American Fashion is far from okay. But Jean-Raymond makes us optimistic.