NEW YORK, United States — More fashion shows should take place in public spaces. All the unknown variables of weather and curious onlookers made the performance feel more like a ritual, but also more a part of real life. Luckily, the sun hid behind a cloud just in time for Maryam Nassir Zadeh’s runway show Monday afternoon on the courts of the very leafy Sara D. Roosevelt Park, the largest open space of the Lower East Side. This is Nassir Zadeh’s home turf: her namesake boutique is located just six blocks away on Norfolk Street. The proximity gave the collection a homey feeling as did the fact that many of her friends, like actress Hailey Benton Gates and artist Susan Cianciolo, walked in the show.

Nassir Zadeh’s identity is intertwined with that of the Lower East Side and what has become part of its defining fashion aesthetic over the last decade — a brash, downtown maximalism that feels one part art project, one part vintage update — through her multi-brand boutique, which opened in 2008, and her namesake line, which started in 2012 and joined fashion week three years ago.

She’s known for her often copied shoes, but Nassir Zadeh’s influence extends beyond that to ready-to-wear, the way her lookbook images are shown and the way her Instagram feed looks. She is the influencer's influencer. Her point of view artfully collages silhouettes and accessories from different cultures and decades, formed by her own vintage finds from travelling home to Turkey and beyond. It feels sensual and maternal. She likes materials and silhouettes that have been seen as tacky and makes them elegant. There’s a lot of textures.

While she’s been on the fringes of mainstream fashion, the industry is starting to realise how important she is to the landscape here. At Tom Ford’s kickoff dinner for fashion week last Thursday, she was seated at his table next to British Vogue Editor-in-Chief Edward Enninful.

For her latest collection, Nassir Zadeh did her version of buckling down: fewer looks, less pops of loud, garish colours that have sometimes overpowered her silhouettes in the past. She said it was the result of “getting to know myself better as a designer,” as well as a personal mood for something more restrained after a busy summer of travelling in Europe and around the Mediterranean. “Coming back, it’s always a restart.”

But she still offered plenty of off-the-beaten-path choices to feed the appetites of her acolytes of cool-girl followers. The knee-length striped spandex shorts, shirts worn over-attached pants stood out, as did several lace pieces. The final dress, accessories with white lace hose and a white scrunchie veil, was delightfully on-brand for an MNZ bride. Later in Brooklyn, Phillip Lim lured the fashion folk out to Williamsburg with his first combined men’s and women’s show in years. “I was afraid — how would they align? Because sometimes women’s clothes is a bit more fierce and men’s is a bit more restrained,” he said. He felt the result represented the kind of gang of "global citizens" he aims to dress. His brand may not feel connected to any specific community or influential subculture, but he knows himself and its strengths well.

Lim takes the utility of his collection’s sculptural anoraks and crisp painter’s pants seriously and mixed that in with some fun accessories and details, like leather bandanas or a blazer with a small hood drooped over the back. It was a very precise, structured and largely monochromatic collection that made you want to look closer, especially when he used a lacquered fabric that looked like a silk-leather hybrid. The prints, inspired by Andy Warhol’s and Robert Rauschenberg images, read as familiar even though you couldn’t quite place it. A good match for Lim’s vibe. 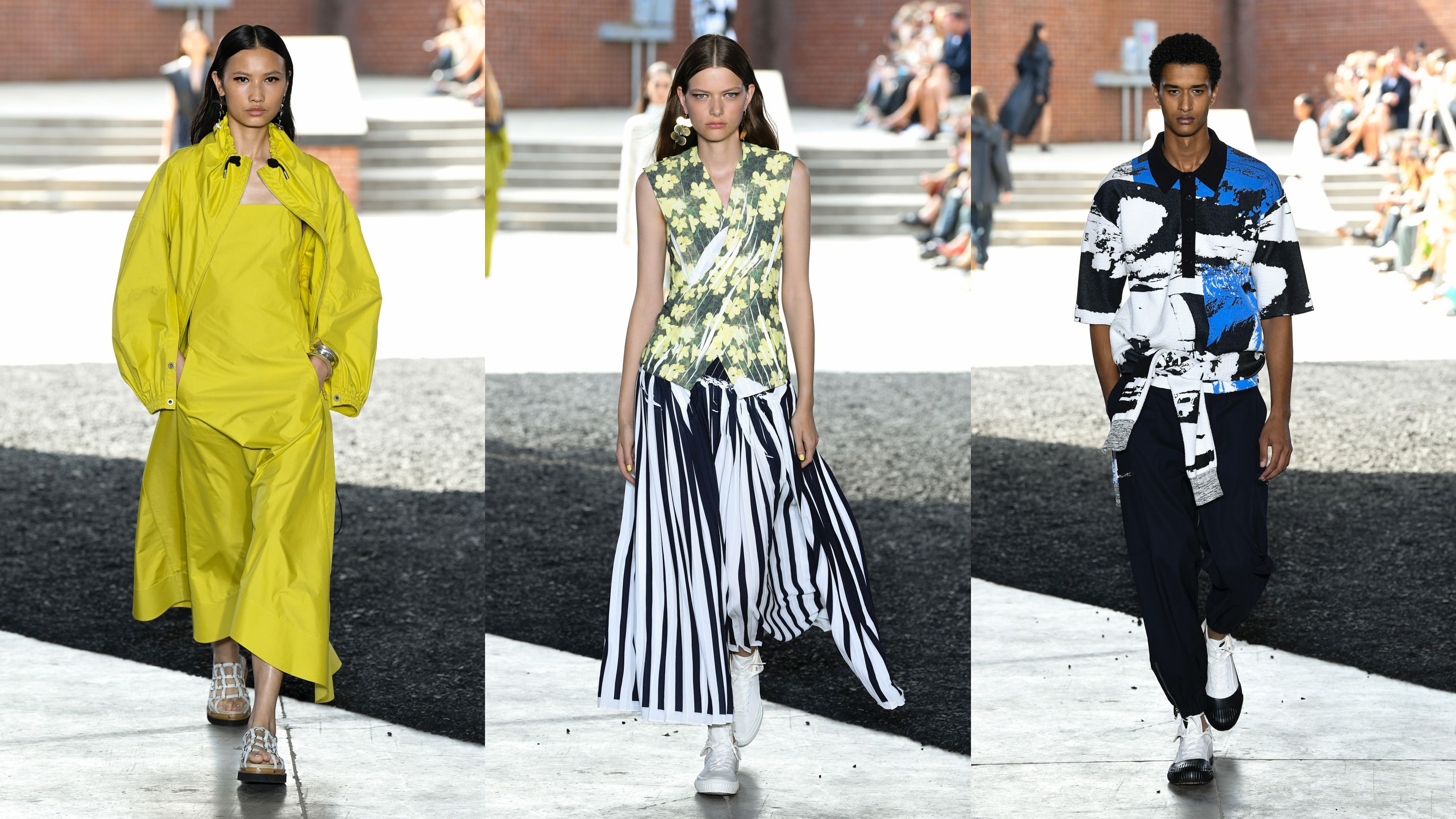 The Masonic Hall headquarters were also a vibe on Monday night, as three smaller-scale and more experimental labels — Vaquera, Creatures of the Wind/CDLM and Section 8 — joined forces to put on a combined show. Runway presentations are expensive propositions and attendance can be hard to guarantee. The strategy was meant to combat that, and the show was harder for editors and critics to overlook.

The approach felt natural, not just because the designers involved have known each other for years or have mutual friends, but also because they each reject the traditional fashion system in the hopes of creating clothing more on their own terms. Each label showed sequentially, with one combined finale at the end, and were separated by different music and lighting.

Section 8, an anonymous collective of designers publicly led by stylist Akeem Smith, kicked off the show with delicate but goth cut-out dresses that patched together leather or manipulated mesh tights. Smith said his partners in the label are a “shy bunch,” the implication being they also work for other brands, and that the label was born during a “ketamine night” when they decided to put their social angst into a collection. But they hoped the presentation would prove to the audience that Section 8 is not just a side-project. The new collection was titled, “Problematic Princess Across the Colour Line,” and Smith described the label’s ideal women as someone who can “navigate through any social situation.”

Chris Peters and Shane Gabier of Creatures of the Wind have seen all the ups and downs of the emerging designer lifecycle — the fashion fund boosts, financial backers with big expectations, the crumbling wholesale market — but recently reached an “aha” moment with both their shared label and CDLM, which Peters started on his own but which has also become a group effort with Gabier. They create small runs with almost all deadstock or vintage fabrics, and sell it in capsules with retailers like Dover Street Market. (Its founder Adrian Joffe was in the audience on Tuesday.)

“Once we started to make whatever we wanted, we had 100 percent sell throughs,” said Peters.

“Six or seven years ago, there was a system and you were in the system or you were not, and this would have been a lot more difficult for people to accept,” said Gabier.

Their goal is to find beauty in unexpected places, like 1960s women’s jackets, which they enzyme washed, remade and screen-printed with the work of a Scottish artist whose prints they bought from an estate sale. Their assemblage approach feels elegant, not do-it-yourself, even though they don’t always try to hide the collages. Standouts included a vintage t-shirt layered over a coat and a series of printed sheath dresses made from tablecloths and curtains from the 1930s to 1950s.

“We are trying to democratically talk about beauty and what we think is special and beautiful… How can you make a new thing?” said Peters.

Vaquera, the irreverent design trio comprised of Patric DiCaprio, Bryn Taubensee and Claire Sullivan, closed out the combined show with another edition of their signature approach to the runway — furiously fast-walking models, male models in women’s clothing and comically oversized silhouettes and accessories, like a knee-length golf-ball-sized pearl necklace worn with one look.

It felt like a continuation of their past collections, which deconstructed what people are expected to wear to work or school, with more wearable options like cocktail dresses and going-out tops. Vaquera is at its best when they make you see something as simple as a blazer differently by manipulating its size or cut in simple ways. But sometimes it’s still unclear what the designers want this brand to be.

The show opened with a shirt that read “In loving memory of New York,” which pointed to their personal narrative about overcoming disillusionment with the city and its fashion industry.

“We were thinking about being let down in different ways,” said DiCaprio. “Cranking out two collections or three or four a year will drive you crazy.”

He said they are learning to balance the need to reinvent themselves each season with elaborating on ideas they’ve already tackled. The community of creatives around them helps. “Coming together [for the group show] is a necessity and a beautiful thing at the same time.”