Of Two Minds at Pal Zileri

Creative director Rocco Iannone's captivating ideas were slowed down by quite a number of classic suits. 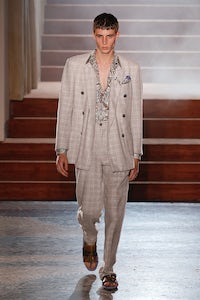 Of Two Minds at Pal Zileri

Creative director Rocco Iannone's captivating ideas were slowed down by quite a number of classic suits.

MILAN, Italy — In a press meeting before the Pal Zileri show, when pressed to express his personal connection to the new collection, creative director Rocco Iannone said, somewhat mysteriously, that he was indeed very satisfied with what he had produced this season. But also that, as a creative director, he has to pay attention to the needs of the brand.

Despite all of Iannone's effort to be more inventive, Pal Zileri, in the mind of the public and certainly in the will of the management, keeps being perceived as a classic, sartorial brand. The contrast between these two aspects was evident in the show, which was polarised on the opposite extremes of excess and classicism. The collection, entitled Capriccio — as in the art and musical genre that consists in a highly personal jumble of many different things — was heavily redolent of the Eighties: low-collared double-breasted blazers, pleated trousers, sleeveless suit jackets and printed silk twill shirts, invariably worn with multi-material driving shoes.

The thought process behind it all was certainly captivating: a sign, probably not the most perfect one, of the mind of an author. In the show, however, the effect was slowed down by quite a number of classic suits. It looked like Iannone was suddenly imposed upon by a superior force, and he simply had to adapt. As a whole, the effort looked bifurcated. One just hopes designers are left room to express their own vision in a complete way.