Designers Erin Beatty and Max Osterweis took traditional ideas and twisted them into something that felt very on-brand. 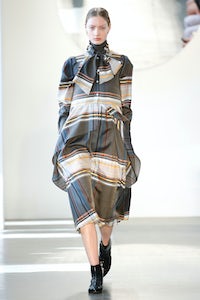 Designers Erin Beatty and Max Osterweis took traditional ideas and twisted them into something that felt very on-brand.

NEW YORK, United States —  Erin Beatty and Max Osterweis have a lockdown on off-kilter dresses and separates that somehow manage to be commercial, too. “We’re always torn between going toward something conceptual and something real,” Beatty said backstage after the show. “In this time of real chaos, you have to focus on who you are and who you want your girl to be. It’s kind of like, if you build it she will come. I hope that we did that with this collection and that it will make her feel weird and cool and together.”

Beatty and Osterweiss' tartans were particularly successful, rendered on schoolmarm dresses that were cut far away from the body and tiered for subtle ruffling. The designers also mixed woollier plaid tops and bottoms with stripes and geometric patterns to achieve that distinctly Suno blend. Their shiny damask embroidery was subtle but more intriguing than the all-over metallic pieces, which felt more like a reaction to what’s in the fashion ether. In all, the designers seem like they’re in a good place and more ready than ever to build on their early successes. 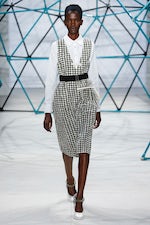