Virgil Abloh showed an unlikely suite of garments, whose more provocative, ridiculous ideas were tempered by a smattering of beautifully-engineered and truly modern clothing. 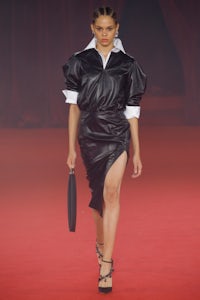 Virgil Abloh showed an unlikely suite of garments, whose more provocative, ridiculous ideas were tempered by a smattering of beautifully-engineered and truly modern clothing.

PARIS, France — A few years (even seasons) ago, the idea that a man famous for stripy, zebra-crossing streetwear would reference the razzamatazz of Viktor & Rolf’s tulle, Escada’s pastel suiting, and Ungaro’s puffball animalia in the same show would have been utterly absurd. Today, however, fashion is a strange playground, and Off White’s Virgil Abloh is one of its polymath magicians.

His Spring Summer 2018 collection was named after ‘Natural Woman’ – an abstract contextualizer of a song that, at quick revision, has Aretha Franklin (60’s), Carole King (70’s), Celine Dion (80’s) and Mary J. Blige (90’s) all belting out its femme power lyrics in a plethora of different styles. This show had those later decades in mind, or is that ‘on moodboard’, as Abloh furthered his exploration of fashion’s greatest hits that has situated his runway in a strange limbo of late. It’s a pleasant place to be, to have the freedom to experiment in such an arena, safe in the knowledge that one’s t-shirts and trainers (a new scribbled-on shoe, part of a wider collaboration with Jimmy Choo, marched out this evening) will fly off shelves and e-commerce sites like hotcakes either way.

Here, that meant that his streetwear took a decided backseat, allowing for the folie of cropped and boxy short suits striped in creased tulle, printed ball gowns, and satin cocktail dresses layered with neoprene rash tops. Even hoop skirts made an appearance, swinging along as just some of the moments that marked this show as an anachronistic study, perverting a prim and proper lady through the Off-White lens. From pseudo-corporate fantasies to the prom queen dream, it was an altogether unlikely suite of garments, its moments of provocative, ridiculous ideas tempered by a smattering of beautifully-engineered and truly modern clothing. As such, the take-away here was opulent outerwear: a buttery nappa mackintosh, or a cloudy blue tulle-covered trench and its matching blazer. Against Naomi Campbell’s closing exit of bike pants and a peplum blazer (go figure?), it was pieces like those that made all the difference.