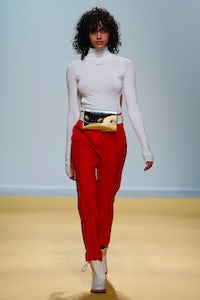 PARIS, France — Virgil Abloh's fashion career was spawned at a time when the art of fashion design was becoming more of an exercise in appropriation, collage and creative direction. Abloh trained as an architect, yet his clothes lean less sculptural. Instead, they openly steal and borrow, keenly aware of the rule-breakers who came before them — Helmut Lang, Martin Margiela, Hedi Slimane — and, as such, tread a fine line between trendy streetwear and evening wear elements.

His latest show was an edgy wardrobing exercise of pieces that had little in common, ticking too many boxes to form a cohesive whole. From the clubkid energy of his opening looks (there were baggy pants, second skin turtlenecks and fanny packs) to the raw femininity of linen bustiers bursting with metallic pleats, there was a serious disconnect. It felt counterintuitive, echoing neither Gucci's eclecticism nor Vetements' aggressive sportswear with any great conviction.

Abloh showed blazers and coats falling off one shoulder and snap-studded to wrap around the body (a styling affectation that held little real-world value) and an improbable lineup of paperbag-waist trousers, ruffed leather blouses and pleated silk slips that retained none of the rogue hip hop attitude that has otherwise shaped his designs.

Vintage tees patched into banded tops reclaimed some of his street cred. Like his logo sweatpants, they made for punk moments that unraveled the uptight mood that crept in midway through the proceedings. It's no doubt the Off-White fangirl will buy into their punchy graphic attitude before the more staid, feminine wares that flattened this collection's youth-driven potential. 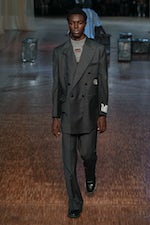 Off-White Beyond the Street 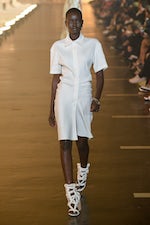 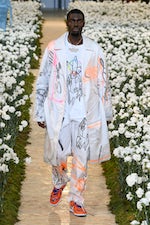 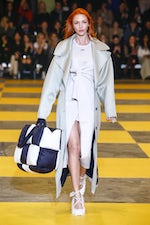