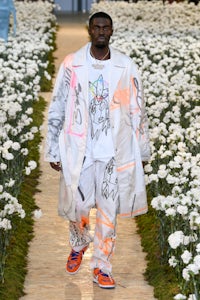 PARIS, France — Is Virgil Abloh’s Off-White a lucrative schtick or cultural phenomenon? An exhibition of Abloh’s work, currently running at the Museum of Contemporary Art Chicago, manages to position him as a societal force. Shopping, the thing he propels his fans to go do, is now an experience just like music, film or art. No one understands that better than Abloh, who designed a new version of his Off-White x Nike Air Force 1 sneakers for the exhibition. Along with merchandise sold at the museum, Louis Vuitton — where he is creative director for menswear — and Nike both opened related pop-up stores nearby.

The question, for a while, has been whether this prolific creator can keep making things fit to be displayed in a museum. If his latest menswear effort for Off-White is any indication, Abloh is perhaps capable of more than what the hedgers expect of him. The collection aimed to give throw-away plastic value, engineering it into knitwear, but also manipulating other materials — like organza graffitied by the artist Futura — to look like it.

Over the past year, plastic has been positioned as a worst-case environmental offender, with fashion companies pledging to use recycled plastic only or to phase out its use of the material altogether. Abloh’s take is less reactionary.

“It has unique properties, the same as anything else,” he said backstage, mentioning that he first began learning about plastic while a student at the University of Wisconsin, which boasts a big Environmental Studies department. “I never would have thought, when I was like, a sophomore, that the knowledge about environmental studies would be useful to my fashion [practise].”

But Abloh’s experience as an American college student during Y2K played a far greater role in the collection than the materials he employed. His hacky-sack kids, in their knitted ponchos and bedazzled jeans in tacky stone washes —some haphazardly bleached — were the fashion-ised version of what one imagines an Environmental Studies major wearing circa 1998. In Paris right now, Patagonia logo t-shirts have surpassed the do-gooder label’s fleece in status, and Abloh re-appropriated this idea, too, showing hiking gear and tie-dyed tees tagged with embroidered boy-scout patches. (All that was missing was a hemp necklace.) He called the look “door-room derelict listening to Soundgarden and Blind Melon.”

The floaty, generic women’s clothes, a part of the Futura collaboration, felt like an afterthought; an opportunity to stick Gigi Hadid on the runway. But for the men — and really, anyone who likes wearing pants and jackets — Abloh’s latest proposition was a whiff of fresh mountain air, showing that the idea of streetwear-as-fashion can indeed evolve into something new. He’ll remain the leader in the movement as long as he continues charging forward, even when he’s telling stories from his past.