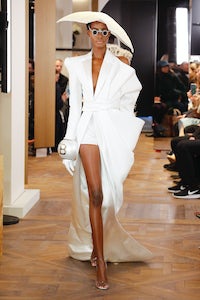 PARIS, France — Olivier Rousteing unveiled his couture vision for the house of Balmain on Wednesday night, as Paris Fashion Week came to a close. It's been 16 years since the house, back then under the creative directorship of Oscar de la Renta, staged its last couture show.

The general fashion landscape has dramatically changed since then, and the codes of the house have shifted, so to speak, to louder ground. Rousteing, who is a committed maximalist and a very good communicator — his #Balmainarmy claim has created quite a loyal following — can count on significant commercial success. You either like it or not, but the excessive sense of decoration and love for sculpted womanly forms he heralds is something to be reckoned with. Given the gang of high-spending acolytes he is able to gather — Kim Kardashian most of all — it was natural for Rousteing to expand to couture. The clientele is already out there.

The show was held in the mirrored spaces of the soon-to-open Balmain boutique on rue Saint-Honoré. The intimate setting made for a salon-like feel, while Rousteing, in the show notes, explained the collection as an imaginary dialogue between himself and Pierre Balmain. He also enthused on the boundless possibilities offered by couture because of the lack of any commercial restraint. It was apropos, then, that what went down the runaway was excessive, extreme, theatrical — mostly white or very pale concoctions that sprouted humongous pearls, sculptural flaps, pleated extrusions and so on. A few of the models were painted white, as to resemble living sculpture. The goings went on and on in crescendo, reaching a farcical height in a series of abstract dresses that looked very rigid.

The craftsmanship was outstanding, but the scope of the whole thing seemed a bit "fashion school." It lacked maturity and focus, which would be good starting points for progress. Rousteing can make it: couture is clearly his thing.