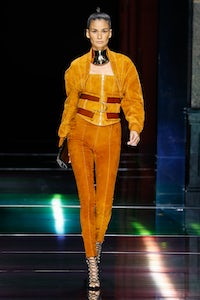 PARIS, France — Olivier Rousteing insisted his new collection wasn't inspired by anything specific, although turning 30 seems to have had quite an effect on him. "In five years, I've built an identity for Balmain," he said before his show on Thursday. "I realised that with the H&M collaboration. It's a celebration of what I've achieved."

But celebration seems to be Rousteing's default position. If he didn't already exist, Instagram would have had to invent him, with his famous friends, his Balmain Army, his nights out and days off. Oh, and those selfie-ready cheekbones (he was actually refreshingly droll about them backstage as he searched high and low for his sharpest angle) and the youth he vaunts. His show notes were a manifesto in which he talked about “bypassing traditional gatekeepers”, meaning all those carping old critics that his recent New Yorker profile quoted. Funny thing about Rousteing though — maybe 30 is young to be running a fashion house, but it ain’t so junior in the wider world.

Besides, the actual style of Rousteing’s clothes scarcely says radical youth. The most contemporary thing about him is his passionate commitment to diversity. “Chocolate everywhere, in every sense,” was how he defined his show. Aside from that though, there was something kinda days-of-yore about the looks, and not only because of the ruffled saloon-girl pants. The palette of browns — beige, camel, chocolate, caramel — was new for Rousteing, but delightfully reminiscent of Claude Montana (so were Sam McKnight’s long, tight ponytails, real Croydon-facelift stuff). Even more Claude in suede. Likewise the super-long, square-shouldered coats over body-skimming skins.

The long, curvy cut-out evening dresses harked back to Rousteing’s formative years under Peter Dundas at Cavalli. (Actually, there were echoes of that dictionary-definition “sexiness” all over the collection, which is no bad thing for Cavalliphiles, when Dundas himself has moved on from that particular signature.) Ultimately, all that does in our Insta-era is definitively disabuse us of the notion that it will ever again be about who-did-it-first. From now on, it’s always going to be about who's-doing-it-now. Which is probably how it should be for the future of the human race. And Rousteing can talk that talk like an old master. 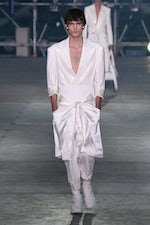 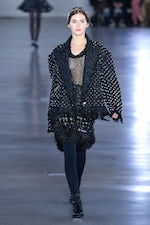 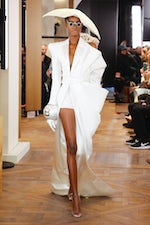 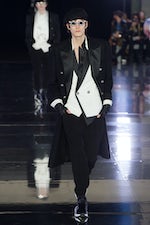