The designer is determined to prove he is more than the arch Mediterranean sensualist. There was a chic polish to his look and a luxe hand to his fabrics that felt new for him. 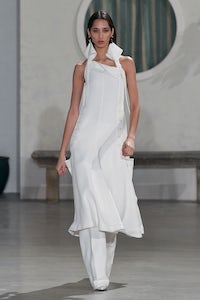 The designer is determined to prove he is more than the arch Mediterranean sensualist. There was a chic polish to his look and a luxe hand to his fabrics that felt new for him.

PARIS, France — The globe’s climactic turmoil has bequeathed Paris a freakish early summer when it ought to still be winter. Which meant that it wasn’t so discombobulating to step from outdoors into the fantasia that Simon Porte Jacquemus had created for his new collection. We were on the island of Murano in the Venetian lagoon, with its village of colourfully painted houses. No, we weren’t. We were on a set built inside a grim industrial estate on the outskirts of Paris. All the signage in the Jacquemus fantasy was in French. But he said he wanted a surreal effect, and he most certainly achieved that.

“I’m a day person, I’m not into night,” said Jacquemus. He is also clearly summer, not winter. His collection feasted on fabulous colour and airy volumes. But there was a chic polish to his look and a luxe hand to his fabrics that felt new for him. He gave credit to the Italian manufacturers he used for the first time.

With this collection, Jacquemus made a very deliberate attempt to distance himself from the story that has already formed around him: the arch Mediterranean sensualist, celebrating the sexy style of the jet set he was obsessed with as a child. He is determined to prove to the world he is more than that. He’s also art lover, avant-gardist, collector. Jacquemus said that, before he started work on the collection, he sat down and listed all the things he loved the most, including Pierre Jeanneret chairs, Gae Aulenti architecture, Eric Rohmer movies, Le Corbusier…and almonds. In one way or another, they insinuated themselves into the finished product, mostly in the ingenious earrings. Oh look, a Jeanneret chair! An almond! And there was his mother, in an earring you could customise with your own photo.

Customising. It’s been a buzzy little notion for long enough that a different take on the idea might pique interest. Jacquemus offered a double jumper situation which could be tied up as a knit halter. But mostly, he showed the kind of trompe l’oeil effects – like two-pieces that are actually one piece – which suggest a dressiness that is much simpler than it looks. That would be a result in many people’s books.

The collection was called Les Collectionneuses, Jacquemus imagining his women as people who collect things. The accessories, in particular, echoed that idea. There was also a Rohmer movie, “La Collectionneuse, ” he said he was nodding to. That underscored the fundamental “Frenchness” of what Jacquemus is doing, doubly emphasized by the supportive presence in the audience of local fashion icons like Christian Lacroix and Ines de la Fressange. He's a season away from his tenth anniversary. Think about how young he is, how much he still has to achieve. And remember these moments. 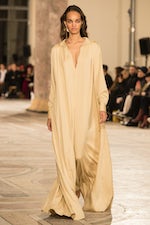 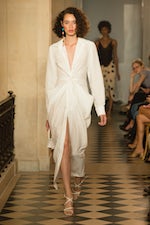 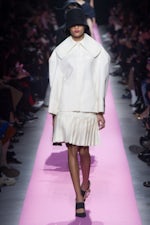 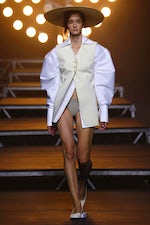