His clothes fearlessly toy with ugliness, and why they end up looking so much more original — and more peculiarly beautiful — than just about anyone else’s. 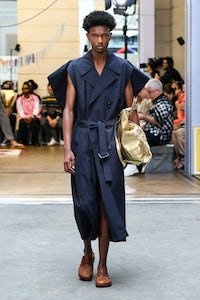 His clothes fearlessly toy with ugliness, and why they end up looking so much more original — and more peculiarly beautiful — than just about anyone else’s.

PARIS, France — Jonathan Anderson’s post-show musings are understandably a mine of exhaustion-fuelled verbiage from which you must astutely pluck the diamonds. This season’s favourite? “There’s modernity in wrongness.” That single phrase simultaneously elevates and soothes every uncomfortable, inadequate feeling anyone has ever felt when confronted by the difficult, even incomprehensible outer reaches of artistic endeavour.

Which is fortunate for Anderson, because it’s an envelope he likes to push. The frilled shorts (and matching boots) that he showed for men in 2013 are a case in point. “Wrong” but memorable, as a turning point of some kind. The knit tank dresses, with a central diagonal, edged in tassels, might have been this season’s equivalent. Unless you were drawn to the side-shredded tops — with their irresistible echoes of the 80s moment when you could buy slash-your-own-t-shirt kits, complete with beads. Anderson’s sister bought one.

Anderson loves “fashion” much more than “style.” It’s why his clothes fearlessly toy with ugliness, and why they end up looking so much more original — and more peculiarly beautiful — than just about anyone else’s. He said the 1940’s silhouettes of his last women’s collection had stayed with him to the point where he wanted to make them even stronger. So he opened up the sleeves of a trench, a tux, a grey flannel suit to create “wings” of fabric. You could almost imagine the models taking off on a downdraft, which was a reminder of how playful Anderson’s clothes can be. And that’s what connected an otherwise sober black suit with the eyepopping patchworked knit pieces, or the knitted donuts that crowned the models’ heads. Some of the looks here could have stepped out of the pages of a fairy tale: the (donut-crowned) handsome prince in the mosaic overshirt, wrapped in a fringed silk scarf; the princesses in their layered, floaty dresses, some swathed in plissé capes, others in tuxedo gilets. They were real princesses, by the way. Anderson showed his resort collection alongside his menswear.

The fairy tale element is possibly another facet of that playfulness I mentioned. In fairy tales there are often transformations, and that is something Anderson thrives on. It’s the essence of craft after all, and his love of craft is famous. Here, the weighty patchwork handknits held the wicked promise of sagging, turning into something languidly uncontrollable, a flow you could only go with, and a silhouette that would change of its own volition. The randomness of that appealed to Anderson. Was that wrong? No. It was modern.