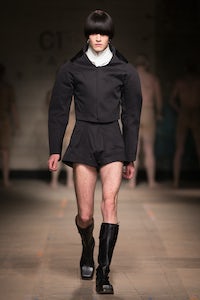 LONDON, United Kingdom — London has always been marked by designers whose significance far outweighs their commercial oomph. After ebullient Glaswegian marvel Charles Jeffrey's awe-inspiring performance at Lulu Kennedy's MAN show on Friday night, a young-ish fan enthused, "It's the first time our generation has had a designer like this, our own Westwood or Gaultier." Meaning a designer who so artfully combined the urge to get thoroughly dressed up with an appetite for outrageous display.

‎In other words, Jeffrey is speaking to young London the way Alexander McQueen spoke to his generation. And, speaking also of significance, McQueen was already the fashion industry’s enfant terrible before he’d produced a stitch of clothing to actually sell. Jeffrey is the latest strand in that damn-the-torpedoes DNA that defines the best of British.

The presentation itself was an outre thrill‎, the Theo Adams dance troupe — near-naked, mud-caked — providing a percussive pagan thrum while Jeffrey's cast of extraordinary characters paraded by, with echoes of the Tudors, Regency England, a little religious ritual. The rich historicism is a characteristic of this genre of British fashion. So is gender fluidity. Jeffrey showed a schoolgirl's pleated microskirt under an hourglass jacket. But, to refer back to the fanboy's evocation of Gaultier, the theatrics were in service to a precision, a craft, a luxury that mark Jeffrey out as one to watch.

One last thing about those theatrics... Gary Card created huge alien creatures that lumbered down the catwalk to break the show's story into chapters. At the finale, a towering Black Queen (underneath the "outfit", New York performance artist Scotty Sussman) drove the mud people wild. Thumping and grunting, they followed her off the catwalk, blinded by fashion. You gotta love London!