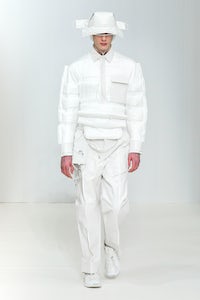 PARIS, France — This show was the last in a triptych for Craig Green. He defined its theme as “packaging the body” but the previous two stages had already done something similar. Autumn/Winter 2019 focused on plastic. Spring/Summer 2020 was all about the primal power of skin. The stuff that ruled this closing segment was rubber. What they had in common was the notion of protection. That has been at the heart of Green’s menswear since the very beginning. In his world, men have been vulnerable, fragile, on the brink of shattering, even. They have needed succour and shelter. Green’s designs have offered both, in extraordinary, defiant reconceptualisations of the very basics of menswear.

That all came to a head on Sunday afternoon with a transcendent finale, bodies packaged in a cascade of colour, veiled behind what looked like slatted blinds, the latest expression of the signature body sculptures with which Green has altered the space around the human form. They were so magical that they made me think of Shakespeare: “How beauteous mankind is! O brave new world that has such people in’t.” No eyerolls please: Craig Green can drive a guy to such grandiose flights of fancy.

What loaned the clothes added weight was the depth of thought that went into them. Maybe it’s going too far to colour this collection as a meditation on male mental health issues, but listening to Green’s clarification of his “packaging the body” theme, some very clear subtexts emerged. A long cashmere shift seemed luxurious enough, except it was lined in the kind of waterproof material used to protect mattresses from habitual bedwetters. “It is protected from you as much as you are restricted from feeling it,” said Green. He considered this a comment on human relationships. Likewise those blinds in the finale. Windows made him think about looking out while other people are looking in: two-way voyeurism. Detachment. People falling in love online without ever actually meeting each other. Touching someone with gloves on, so you don’t really feel them. “You put up barriers as you age, to stop you connecting with people,” Green mused. It was a curious observation, in light of a collection that was entrenched in tactility.

The most packaged looks here were quivering nets of rubber, the kind you see wrapped round fruit in Japanese supermarkets. “It’s the mesh they use to stop bleeding, like tourniquets,” the designer explained. “It’s used in slingshots too.” The rubber was hand-dyed, a bizarre combination of industry and artisan. For Green, the idea of elasticity was essential: the concertina effect of stretching and unfolding, like a blind, represented growing up for him. You’re handed an outfit at birth, you unfold it, adapt it, and as you grow, you wear the imprints of the past. He’d wanted to do that last season, imprint pictograms into the models’ flesh.

Such a pagan notion hints at the breadth of Green’s ambition. It spans millennia. Latex is a futuristic material but Green smocked it, to look like a medieval ruff. Neo-medievalism: it’s a thing! The ripstock that you’d usually find in a boat’s sail was turned into leather-look suiting. That trick of the eye was Green’s droll way of saying that sometimes the packaging is more important than what’s inside.

His theme — essentially, human being as commodity — is hugely topical in our Orwellian era of wanton data harvesting. Dystopia beckons. But it always has in a Craig Green collection. Optimism is locked into a photo-finish with despair, and I honestly couldn’t tell you which one will emerge the victor, especially given that Green’s own commentary casts such a shadow. But, on Sunday, the detail of his designs, the intricate ingenuity of the seaming, the marriage of art and function were an entirely joyous glorying in creation, with the assistance of a remarkable soundtrack by Frederic Sanchez that matched every nuance of the collection with a corresponding aural surge. Green said that he wanted his Paris debut to feel like a positive new energy. As the best of all possible worlds, it did.