This was a compelling collection but lacked Julien Dossena’s trademark sense of gentle control, making the goings a bit haphazard, if still joyous and fresh. 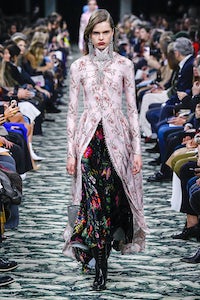 This was a compelling collection but lacked Julien Dossena’s trademark sense of gentle control, making the goings a bit haphazard, if still joyous and fresh.

PARIS, France — There was a lot going on at the Paco Rabanne show today, starting from the decorative carpeting across the whole floor, swarming in a pattern of feathers. In fact, there was everything save for Paco Rabanne's own brand of futurism, if we were to narrow it down to a single code.

What we saw — obsessively styled in ways that gave every look a spinning, hypnotic vitality — was closer to the language of Emmanuel Ungaro, if you like, or to Rifat Ozbek’s freewheeling zest for métissage. There was a lot of decoration, print, sparkle and colour.

The sight of a group of duchesse skirts with a train covered a rose print — think Marie Antoinette as seen through the eyes of ’50s couture and a zing of Helmut Lang — was as far from space-age metal dressing as it possibly gets.

Julien Dossena has clearly freed himself from the narrowness of orthodoxy. He is building his own Paco Rabanne code — an eclectic one, with a sense of rigour underneath — much like Nicolas Ghesquière did back in the heyday at Balenciaga. This newly frivolous and flirty Paco — not to worry, the cowboy boots are still there and there were enough tailcoats to keep the boyish contingent happy — was a new, more chaotic iteration of spring bohemia.

By exploring parade dressing, from pageantry to royal uniforms, Dossena wanted to promote an idea of beauty — even the clichés — as strength. This was a compelling, engaging collection: one that was visually entertaining and stimulating, but that also left you quizzing. What lacked, in fact, was that gentle sense of control Dossena masters so well. This one, instead, at times felt a bit haphazard, if still joyous and fresh.