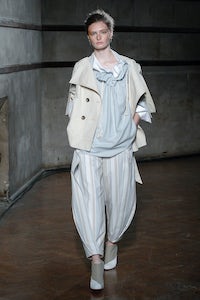 LONDON, United Kingdom —Palmer Harding have come a long way from their specialist shirting and although the endless variations of the cotton style is still the core of their offering (and it seems, everyone else’s), the design duo have nailed a wider wardrobe that resonates with their cubist sensibility. Since co-winning the BFC / Vogue Fashion Fund in April, the brand has grown its team from five to 11 (last year, sales were up by 140 percent) and the expansion is allowing the designers more time to think creatively and finesse their technique as their business grows.

Levi Palmer and Matthew Harding said that for this collection the colour palette of ochre, crimson, pale blue and copper-and-navy was inspired by Robert Rauschenberg’s Combines and that they tried to evoke those messy brushstrokes with contrasting fabrics like embossed checks, chenille stripes and lurex. The idea of memory, they said, was also important and came into play with the out-of-focus styling, where some pieces were postured to be falling off, or twisted around the body, and a flounce of cotton or ruched detail might look slightly blurry compared to the sharper points within the same look.

At its core, it was a wardrobe of basics, such as the trench, men’s shirt and soft-knit cardigans, but Palmer and Harding abstracted each piece with clever pattern cutting and gave each one a sense of motion, even though there was not much movement. The sense of layering was superb and it was more than a styling trick, as each of these pieces can be worn in multiple ways, whether that’s seductively shrugged off the shoulder or structured in a more conservative mode, thanks to unexpected fastenings and buttoning. It will surely be catnip to their loyal following, which even includes the British prime minister.