Miller has a remarkably consistent vision but, this time, his emphasis on sustainability offered a contemporary update. 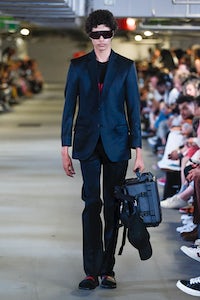 Miller has a remarkably consistent vision but, this time, his emphasis on sustainability offered a contemporary update.

LONDON, United Kingdom — Matthew Miller’s show took place in an underground carpark deep in the bowels of Chinatown. A huge concrete bunker, in other words. That fitted right in with the protectionist, survivalist ethos that Miller has promoted to great effect over the past five years. Idealism and its handmaiden disillusionment have been his touchstones. So Paradise Lost — the name he gave his new collection – had a here-we-go-again ring.

But that title was, in fact, an entirely ironic statement on his part, because Miller claimed he had actually found paradise in the attitude of a new underground subculture whose commitment to planet preservation has infused him with optimism. Recycle! Reanimate! Sustain! “This new generation won’t let us lose paradise,” the designer insisted, even if he didn’t seem completely sure whether it was millennials or Z’s we were talking about (I opted for the latter).

Miller’s collaboration with US sneaker brand K-Swiss and a Spanish company which has mastered a new mode of fabric recycling resulted in Redux, a 20-piece capsule that seamlessly merged old band t-shirts and sustainable materials to create classically minimal Millerisms: sweats, tracksuits and new t’s, rising like phoenixes from landfill fires.

The rest of the collection was equally classic Miller, edged in dystopia. For all his insistence on the upbeat, his men and women still moved through a world where protection was critical. If any designer is qualified to cut clothes out of silver foil emergency blankets it is surely Matthew Miller. His padded vests will always look like body armour. The military pockets and pouches were the accoutrements of the devoted survivalist. The models carried chunky cases by Peli, the kind war photographers would choose to protect their equipment. (Miller proudly announced they could survive a fall from a highrise.) The colour accent was an appropriately toxic yellow, a “fresh” take on hazmat.

Miller’s has been a remarkably consistent vision, even if, this time, his emphasis on sustainability did offer a contemporary update. He claimed he’d been looking for ways to recycle efficiently for ages. And maybe he’d also been looking for ways to soften the hard, structured edges that have always defined his work. That’s the pass I’ll give him for the pool slides that accessorised the show. Ugh!