In Paris, a Global Platform for a Fashion Industry in Extreme Flux

Buoyed by inbound talent and newfound economic confidence, Paris is emerging as the centre stage of an increasingly fragmented industry.

In Paris, a Global Platform for a Fashion Industry in Extreme Flux

Buoyed by inbound talent and newfound economic confidence, Paris is emerging as the centre stage of an increasingly fragmented industry.

PARIS, France — On Tuesday, right after his Autumn 2017 haute couture runway show, Chanel designer Karl Lagerfeld was decorated with a Grand Vermeil medal, the highest honour the city of Paris can bestow upon a person. Mayor Anne Hidalgo presented the award to Lagerfeld under a 38-metre-high, quite-convincing replica of the Eiffel Tower, constructed inside the Grand Palais.

For the morning’s show, Lagerfeld had transformed his preferred venue into a tree-lined Parisian park (complete with a border terrier, who napped underneath a folding chair as if he was lounging in the Jardin du Luxembourg). It was quintessential Paris, underscoring the designer’s own relationship with the city and its significance to the house of Chanel, but also its enduring relevance and importance to the global fashion industry.

Over the past several years, the relevance of fashion week as currently conceived has been questioned on several levels. While there used to be value in centralised venues across the world's major fashion capitals where the trade could view and examine clothing, digital access has changed the game. 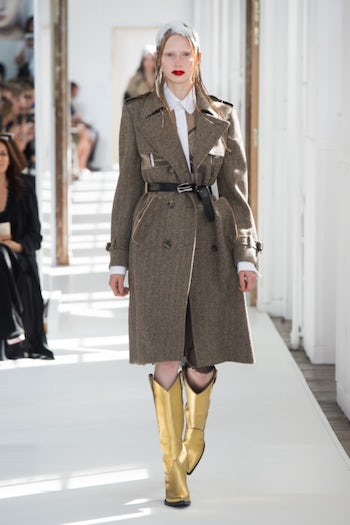 For some designers, it matters less and less how you show — via runway, via presentation, via video — as long as you are able to communicate your message in a way that resonates with your audience even if the physical runway can still yield tremendous power.

Some say where you show doesn’t matter anymore, either, considering that designers — from Opening Ceremony to Tommy Hilfiger to Tom Ford — are hopscotching from city to city to present their collections. In a globalised world, where brand identity has less to do with provenance than personality — and everyone is a citizen of the internet — designers see less value in being tied to one city.

That is, unless that city is Paris.

This September, New York Fashion Week’s Spring 2018 schedule will be missing several big names. While Tommy Hilfiger is off to London, several designers have chosen Paris as their platform. Proenza Schouler, Monique Lhuillier and Rodarte already showed during Haute Couture this week. Thom Browne will show its womenswear in Paris this autumn, and, according to market sources, another major New York label is about to announce the same.

At the haute couture shows, which ended on Wednesday with Fendi and a lively party thrown by the Fédération de la Haute Couture et de la Mode, the feeling in the air was that Paris is, unequivocally, the place to be.

"Paris, for sure," Valentino chief executive Stefano Sassi told BoF after Pierpaolo Piccioli's haute couture show on Wednesday. "We have this unbelievable heritage in haute couture, and this is the city for that. Haute couture, despite what maybe people can believe, can be an incredible source of energy."

The departures from New York Fashion Week's September schedule, combined with the light showing at next week’s New York men’s shows, may be a particular cause for concern for the Council of Fashion Designers of America. The Belgian designer Raf Simons will be the main attraction at both the men's shows and the women's week in September, when he will debut both his men’s and women’s collections for Calvin Klein.

Paris has emerged as a beacon of stability amidst a concept of fashion week that, elsewhere, is very much in flux.

And it’s not just New York that is in flux. While Milan has felt the jolt of Gucci since the arrival of Alessandro Michele, the rest of the week has cooled. In London, as the city faces increasing uncertainty around Brexit, the promising crop of talent that made its fashion industry so exciting a decade ago — including Mary Katrantzou, Peter Pilotto, Christopher Kane and Erdem — seems to be experiencing growing pains, both creatively and commercially. Would taking the bigger stage of Paris, as fellow Brits Alexander McQueen and Stella McCartney did, also help these designers graduate their businesses to the next stage of global development? 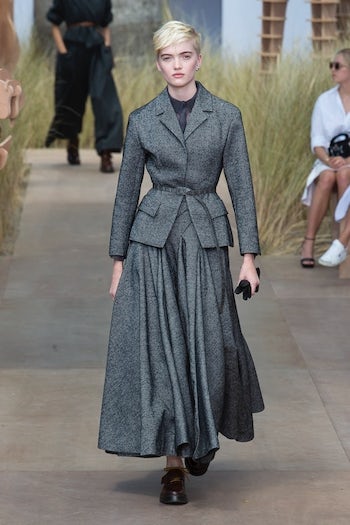 “We push a lot for Chanel at Paris, because we believe Paris, more than ever, needs to be the capital, centre — whatever you call it — for fashion activities,” Bruno Pavlovsky, Chanel’s president of fashion, told BoF. “Not that there is no space for others, there is. If I try to define the different fashion weeks, we like to keep Paris for creativity. That’s something that is very important to us, not only because it’s the beginning of everything but because we have these ateliers.”

As designers seek to customise their presentation approaches — showing men’s and women’s collections together, showing in-season, showing off calendar, or in an unexpected location — the city has emerged as a beacon of stability amidst a concept of fashion week that, elsewhere, is very much in flux.

“You can show in any place in the world today. If you want to be important in China, why not do a show there?” said OTB president Renzo Rosso, whose Maison Margiela label bowed at Haute Couture Fashion Week on Wednesday morning. “But it’s nice to stay in Paris for couture, because it’s a real fashion week.”

Showing in Paris not only allows designers to access an extended network of buyers, editors and more direct exposure to potential investors (including the luxury conglomerates that are based there), but it also allows them to tap the city's renowned ateliers des savoir-faire, which specialise in techniques that can elevate collections.

“There is a trend toward individualisation,” Pascal Morand, executive president of the Fédération de la Haute Couture et de la Mode, told BoF in a recent interview. “The challenge of fashion week is to feel globally cohesive, but with more choices.”

In an effort to try to carve out a special place for Paris, Morand and his colleagues at the Fédération — which is responsible for the scheduling of both the haute couture and ready-to-wear fashion weeks in the city — are creating a new ecosystem, welcoming new designers into the fold from across the globe at a never-before-seen clip. By labelling many of them as “guests”, the organisation is able to retain its high standards while broadening reach.

You can show in any place in the world today... But it’s nice to stay in Paris for couture, because it’s a real fashion week.

Paris, for many designers, represents pure fashion, and in the drive for authenticity, they are eager to prove that what they are creating is original.

“For a newcomer like us, this aura is extremely important,” said Delphine Bellini, managing director at Schiaparelli, which was awarded the official haute couture label by the Chambre Syndicale de la Couture in January 2017. (The 90-year-old house was relaunched by Tod’s chief executive Diego Della Valle in 2012.) “It’s important that Paris keeps these statutes. I find it extremely positive, as it attracts a lot of people — press, tourists, buyers.” 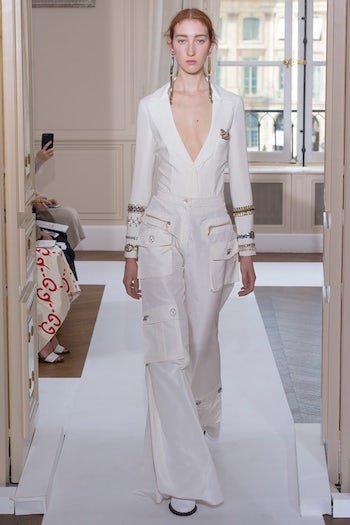 What’s more, as a living, breathing organism, Paris has managed to dissolve the sticky film that for many years rendered the city itself as stuffy as a museum. Today, there is a renewed energy, a freedom of sorts, that is, in part, a retaliation against the multiple terrorist attacks that have taken place in here in the past three years, including the attack on Charlie Hebdo in January 2015 and the November 2015 attacks in the North Marais.

After a major dip in tourism in 2016, a turnaround may be afoot. For instance, over 1.5 million people checked into Paris hotels in January 2017, a 10-year high according to the French National Institute of Statistics and Economic Studies. And while tourism was down overall in 2016, the last three months of the year saw a sharp uptick — 3.9 percent from 2015 — after two consecutive quarters of decline.

Much of the goodwill towards Paris also has to do with the May 2017 election of President Emmanuel Macron, whose centrist leanings, promises of labour market reform and dedication to the European Union have brought a feeling of economic optimism back to the region. In a time of uncertainty, where Trump and Brexit have left much of the Western world feeling panicked and concerned, Mainland Europe once again signals opportunity.

According to a recent report released by Bain & Company, sales of luxury goods will grow 7 to 9 percent in Europe over the remainder of the year, while growth in the Americas — where the strong dollar, political uncertainty and struggling department stores continue to dampen consumer confidence — is expected to be flat at best, slightly down at worst.

"The first half of this year is going in this direction," Sassi noted. "China is doing very well because the Chinese government is trying to transfer the buying inside of China instead of outside of China. Europe is doing well and the United States, despite the fact that the market and the situation is positive, in terms of luxury consumption [sales there] are not unbelievable."

“We have a new president — I think this will be very positive for the economy,” Dior chief executive Sidney Toledano said in an interview with Bloomberg TV. “I am optimistic about the economy and that the coming years will be better. And our middle class will become upper class as we see happening in China, and this is good for luxury.”

Other haute couture fashion houses share a similar sentiment. “We benefit from the local customer, and we will continue to work with them. But we also benefit from tourists coming from abroad,” Pavlovsky said. “We need more than ever as an organisation to offer the best services for the local people, but at the same time be efficient enough to also give these services to people who are travelling. I’m quite opportunistic for Europe in general in the coming years.”

Perhaps it was a combination of all of this that inspired Lagerfeld’s vision for couture this season. “When Paris is strong, that’s good for us, and when Paris is suffering, we are suffering,” Pavlovsky said. “Chanel is a maison Parisienne from the beginning... the better we can do for Paris, the more efficient it is for Chanel, but also for other brands that are Paris-based.”

As for whether many of these transplant brands will make Paris Fashion Week their permanent home remains to be seen, given the added expense and logistical effort required to stage a show here. But there is no doubting that the eyes of the industry will remain firmly on the city come autumn. “Paris is a different from the others,” Rosso said. ”It is the real style influencer.”