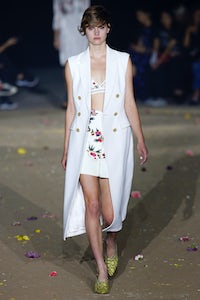 NEW YORK, United States — Philip Lim knows how to set the scene: his Spring/Summer 2017 show set was littered with chrysanthemum stalks and dry earth, both indicators of the season's mood: "the soul of late 50's Nashville... Crooning over a Victorian romanticism", he called it. That improbable combination was whipped up into clothes with an innate prettiness - all ruffled and flower-strewn themselves - undercut by more sinister Western-inspired details that ran from tiny cabochon stud embroidery and zipped-off hemlines to a wanton way with blasted denim.