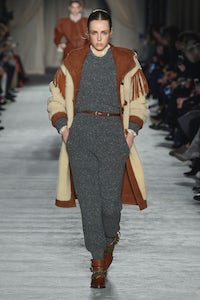 MILAN, Italy — Lorenzo Serafini was born in the mid-Seventies. This means his aesthetic imprinting happened in the thick of the Eighties, when glamour was booming, shoulders were exploding and excess was all the rage. It is understandable that he might feel nostalgic about that time. Everybody else is, even designers from younger generations. The eighties are a major trend this season in Milan and Serafini jumped on the bandwagon. He did so with enthusiasm, but without adding that much to the conversation.

His take on the theme was honest and straightforward: from the slinky dresses to the roomy trousers, from the asymmetric tops to the miniskirts to the jumpsuits, he pressed all the right buttons. It felt lively but also very vintage. The benchmark for Philosophy, as a brand, seems to be Isabel Marant. Serafini clearly aims at defining a similar kind of girl: sassy, in control and insouciant. It's a good target. But being less literal would help.