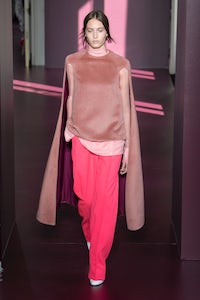 PARIS, France — The first outfit on Pierpaolo Piccioli’s couture catwalk defined everything that followed, like opening acts often do. A pale pink chiffon blouse and trousers in a deeper pink were topped by an item Piccioli called a t-shirt cape, also pink, but this time a deep, dusty shade, lined in purple satin. It was a piece that was simultaneously, paradoxically stately and casual, and it perfectly summed up what the designer called his “contemporary couture.”

“People think of couture as something beautiful belonging to the past,” he said. “I want to keep the rituals, but allow them to be for the future.” With this collection, the rituals of haute couture tapped into Piccioli’s innate spirituality. He talked about the idea of vestizione, the layering of religious garments, as the inspiration for the way he layered shirts, tunics, skirts, turtlenecks, trousers, coats, and – occasionally – an odd little bib as accent. It was unusual to see couture approached as separates. That, according to Piccioli, was the contemporary element. “There are more daywear pieces because women who buy couture also shop everywhere else.” So he showed gold silk pants and a silk poplin shirt, tails flying (very un-couture, he pointed out) under a tunic under a trench coat. (Cut from silk gabardine, lined in cashmere, it was plain but precious.)

Also contemporary was a colour scheme that Piccioli gleefully described as “wrong for couture." On his mood board, he had images of a dozen paintings by the 17th century Spanish artist Francisco de Zurbaran, famous for his saints and martyrs. His palette was significantly similar to Piccioli’s, blues and greens and reds in unusual combinations. But they were harmonized by the power of the artist’s vision. “He invented those clothes,” Piccioli marveled. “He was like a designer.” That was the impact Piccioli sought. All those layers of clothing in all those different colours, “dissonant pieces creating harmony, like music, like life,” he said. “All the layers have to make one piece.” In the interests of unity, he accessorized every look with white ribbed stockings and white booties, a uniform touch that was startling enough to underscore the modernity Piccioli was after.

But this is also Valentino we are talking about, a couture house that has been a repository of fashion dreams for nearly six decades. Piccioli’s quest for contemporaneity elicited some old-school grandeur from the atelier. One gown, which exhaustively collaged different laces together, featured a sweeping back panel of miniscule green glass beads and a hem that looked like the skirt had been somehow soaked in mink. From that micro to the magnificent macro of a tsunami of red taffeta, washed to take away the weight, or a gloriously sensual habit in silk velvet a shade of bitter chocolate so dark it sucked light from the room.

The tension between the sacred and the profane defined the work of haute couture’s early masters, Cristobal Balenciaga in particular. It was on Piccioli’s mind too. For this collection, he collaborated with Harumi Klossowska de Rola on seven bags to represent the Seven Deadly Sins. But the absolutism of the original sins was tempered. An animal was chosen for each, and the symbolic characteristics of that creature counteracted the sin. For instance, the lion, representing sloth, also stood for justice and resurrection. The accessories offered a small but significant full stop to the collection.