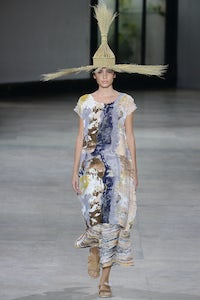 PARIS, France —One of the most fascinating aspects of Issey Miyake's work is the way he deals with style matters that either belong to the future or to the ancestral depths of the past. Miyake always looks for the essence of things.

In stripping everything down to its simplest form, he finds a link between cultures that are spatially and chronologically aeons away one from the other. Miyake is a primitive futurist or a future primitivist: you decide.

But, as we all know, Mr. Miyake is not anymore involved in the design of his namesake collection, which as of late has made the brand's output a little weak, lacking that defining and definitive sense of fierce, heroic femininity.

Womenswear is now in the hands of Yoshiyuki Miyamae, who is more of a textile technician than a proper designer. You can tell. In today's show, Miyamae went back to the more earthy, yet still futuristic streak of the Miyake code. It made for a good collection that although still redolent with Miyamae's own childlike signature, marked a step in a more mature direction.

The simple, roomy and abstract shapes were made playful by new fabrications which allow the wearer to morph and mould them in infinite ways according to individual whims. The innovation comes from the fact that such fabrics do not feature metal fibres. Miyamae subsequently played with folds, bows and flaps, and with crinkled surfaces. It made for a quiet, enjoyable outing. Some more personality would add spice, though. Miyake cannot be lukewarm.