PARIS, France — Two ominous events cast a spell over the rather bland men's fashion week that closed yesterday in Paris, putting things into a strangely lucid perspective. The schedule, again full of voids, was just halfway through when the ‘leave’ result in Britain’s EU Referendum appeared to herald the arrival of a new era of ignorance, isolationism and xenophobia that's totally at odds with fashion's proclivity for multiculturalism, openness to ‘the Other’ and deep-rooted love for mix 'n match.

Then, on the last day of the week, we heard the sad news that legendary New York Times lensman Bill Cunningham had passed away, after suffering a stroke, at the age of 87. He was a strikingly kind and invariably amused gentleman — who invented the very concept of street-style photography and single-handedly managed to elevate the sidewalk to catwalk way before bloggers trashed it all turning the mise en scène into a farce — and probably one of the system's most acutely insightful and subtle commentators. 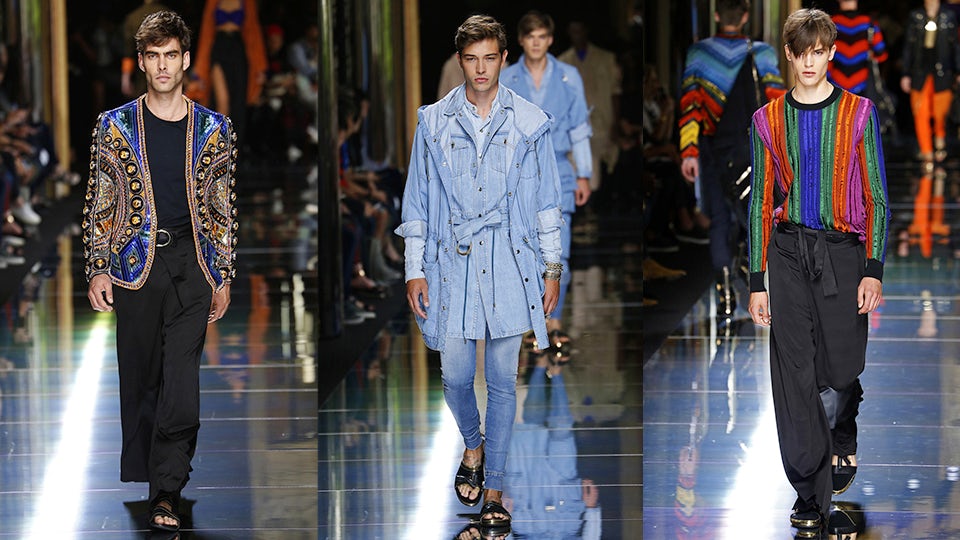 View Collection Such tragic events — one linked with the wider political and economic context, the other with the culture of the fashion microcosm — are of course not directly related to what happened on the catwalks. Yet, in a way, they are. Because, for a start, fashion does not operate in a void. And, secondly, because everything that’s part of the language by which individuals relate to society — including the way we dress — is a political act, not merely an aesthetic choice. 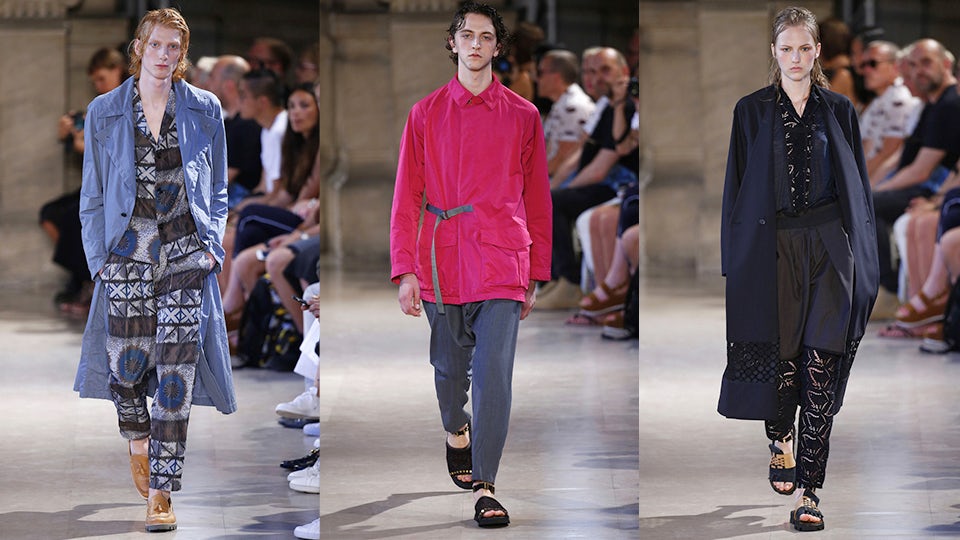 View Collection In this sense, while the resurgence of right wing extremism is all about borders, security culture and protectionism; about denying other cultures instead of having a fruitful exchange with them; fashion’s current preoccupation with travel is all about acceptance, style inglobation and transformation, which is a relief.

Indeed, the theme of travel — both fantasy detour, and physical act — was crucial this season. But what was interesting was much less about travel as leisure, which is one of fashion's oldest clichès, but travel as necessity, be it urban mobility, forced migrations or simply escape. 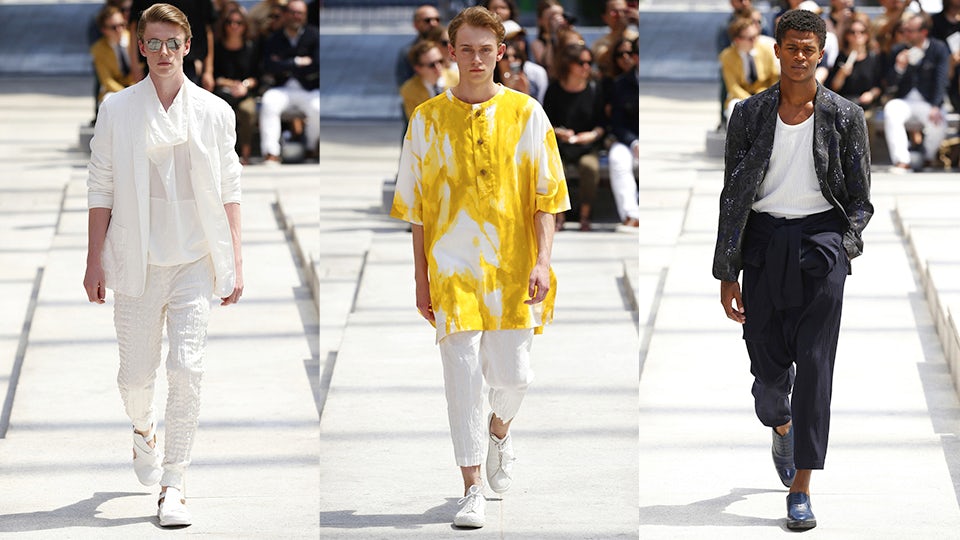 View Collection In Paris, there were as many takes on travel as there are fashion houses, running the gamut from Balmain's flashy foray onto exotic beaches to Kolor's subtle merging of India, Asia and the West to Givenchy's ode to muscled up urban movement, which contained too much overt reference to some of Gaultier's seminal collections. The journey from the white page at Issey Miyake was enchantingly poetic and profoundly soothing — a spiritual joy to behold.

However, nowhere did the theme of travel look as authentically progressive as at Louis Vuitton, where Kim Jones opted for a fast, effective and slightly ambiguous cut-up of wild Africa and punk that was the best possible answer one could give to ‘Brexit’ enthusiasts and xenophobes. It was a mind-opening exercise to see the symbols of punk — a pure expression of white working class anger — morph naturally with the savage beauty of ancestral wildlife — the skins, the colours and the decorations. Appropriation, that's for sure, but there was something emotional and deeply felt about the proceedings. 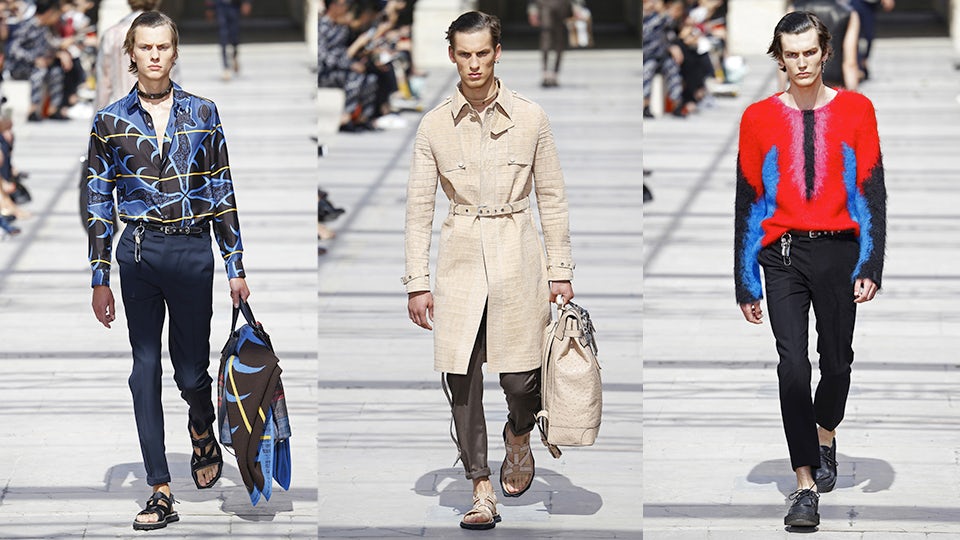 View Collection Elsewhere, travel simply meant pragmatic functionalism, which lead straight to militarism, complete with a flood of army green and a proliferation of useful pockets. At Juun J, this became a catchy exercise in ingenious cover up, while at Valentino, military was sartorially distorted in a quest for beauty in the unfinished, which, for once, did not feel fey or blatantly fashionista. 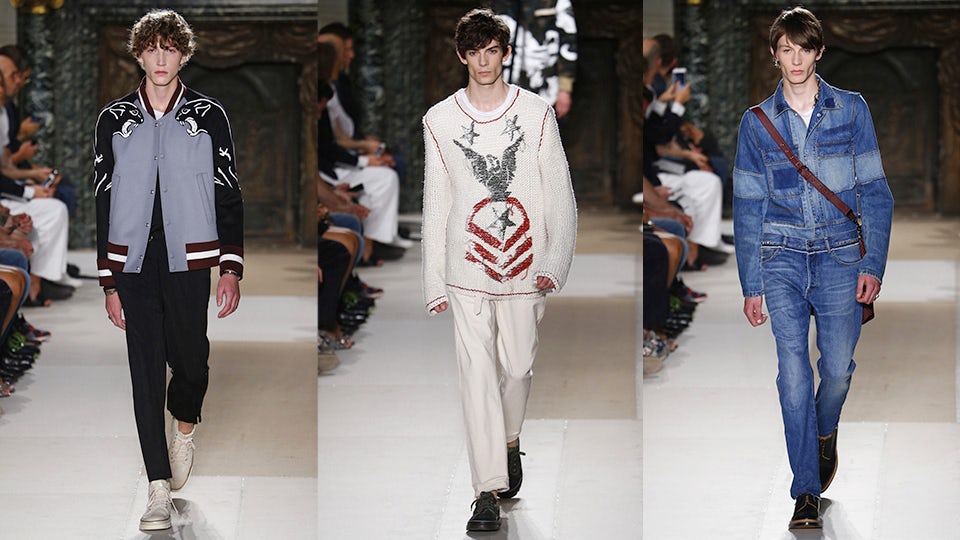 View Collection Otherwise the trappings of travel were just another wonderful styling trick for bland designs. You know: add a snaphook, a rope and a backpack to the collection and it immediately has a nomad feeling. Styling, let's be honest, is one of contemporary fashion's bêtes noires. It is a fundamentally creative act, just as much as it can hide a fundamental dishonesty in the design process. And there is lots of design dishonesty around nowadays.

The more fashion tends towards cold, hard marketing, in fact, the more it taps the treasure trove of iconic subcultures for inspiration. This was the season of punk and ska, for instance. Unsurprising, one might add: both subcultures bloomed in the thick of the Seventies, a troubled era not unlike the present, give or take a smartphone. We saw too literal a take on the theme at Dior Homme; a wonderfully twisted approach in the pink statement made by Chitose Abe at Sacai; and Lanvin's charming mess of crunched-up tailoring and odd sportswear. 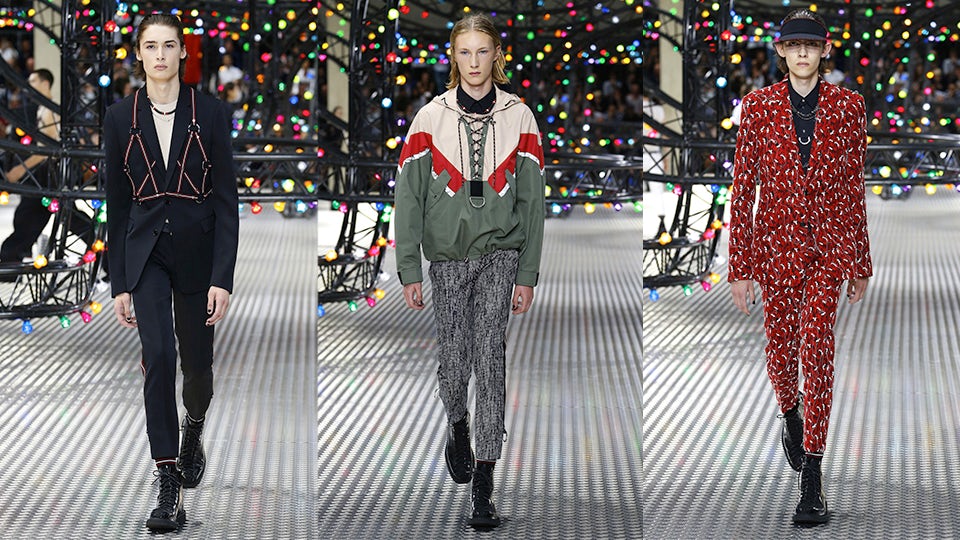 View Collection Yet, this made one long for true subcultural style: the guts-out feeling Bill Cunningham managed to catch so poignantly in his snaps. Because, however authentic the intention, subcultures on a catwalk just turn into a visual formula, as Kenzo's uber-styled clubbers testified. 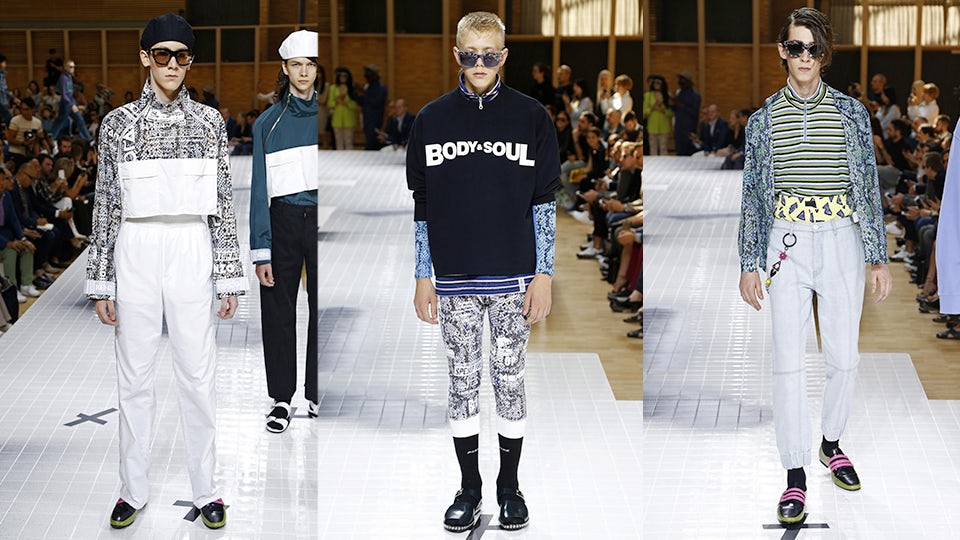 View Collection From Haider Ackermann's dandies to Ann Demeulemeester's fallen angels, in Paris menswear's pervasive gang mentality took a poetic twist that made things feel, in a way, fresh. Today, it's all about the clique. Even at Hermès, the celebration of colour came with clubby feeling of well-to-do youth. It was particularly apparent at Off-White, where guests arrived in flocks and models resembled a posse of kids. But what for? From Gosha to Demna to Raf, creative director Virgil Abloh seemed to blatantly sample every designer worth a little cult, serving up the result as something original, which, even in this era of total appropriation, is quite something. 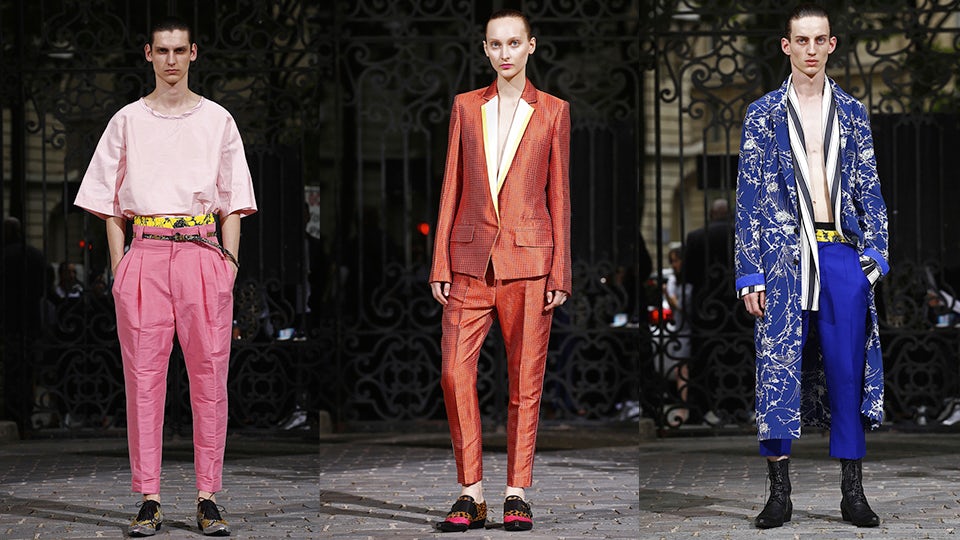 View Collection Overall, this made for a deluding fashion week. Yet, things actually started on a high note with some real design: fabric and cut, which might be in fact the sole escape route from the excess of fiction that's polluting the fashion system at the moment.

Demna Gvasalia delivered the strongest, anti-decorative architectural statement ever in his highly-directional, ultra-divisive menswear debut at Balenciaga, where he either buried bodies into tailored coats/caskets or reconstructed them as shrunken shapes, conveying a nomenclature that sent an almost Nazi frisson down the spine. It made for one of those turning points when fashion changes and everything else seems suddenly old. 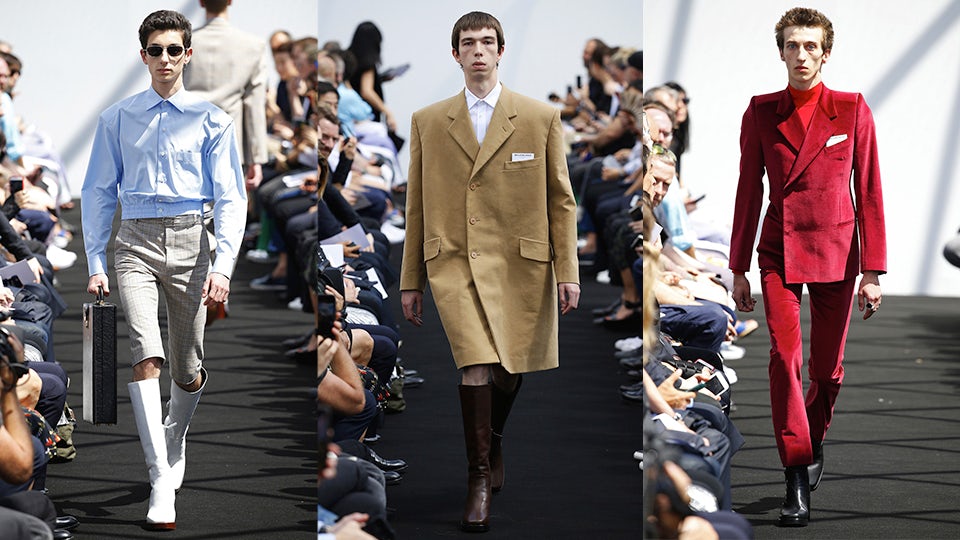 View Collection Gvasalia's obsessive focus on shape, his stubborn will to work on the silhouette, hit the reset button in the simplest and most effective of ways. In comparison to the designer’s reductionist drive, even Dries Van Noten's touching ode to craft and the human hand seemed fussy, like it belonged to a distant past. Yet, in his will to move forward, Gvasalia kept his eye firmly on the 1940s, which made him oddly referential. 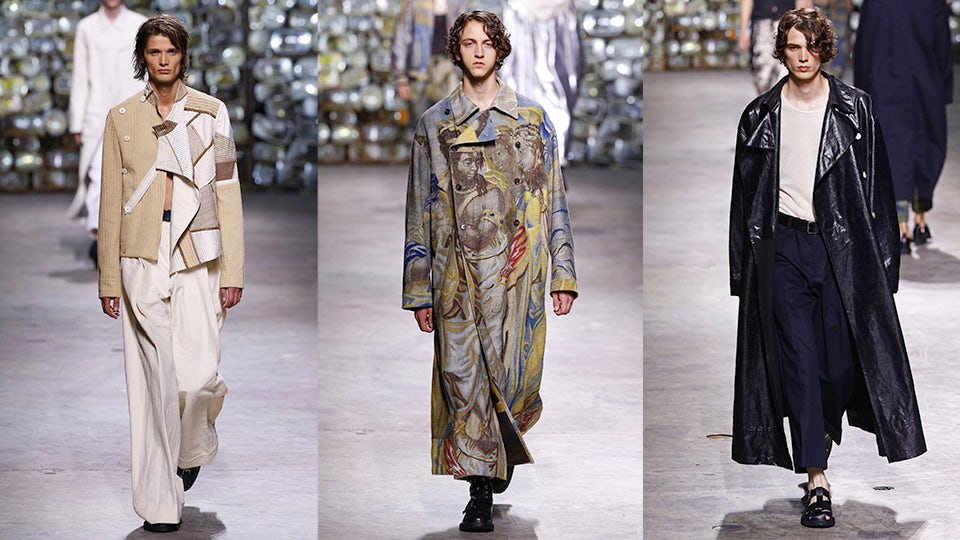 View Collection Beyond Gvasalia, fashion's primo progressive and non-referential hero is the one and only Rick Owens. What he did with silhouette-building and evolutionary draping was a thing of pure, deep, gestural invention. Like it or not, but what Owens does is so visceral and so technically masterful, you have to sit down and take notice. Fashion, today, does not get stronger than this. 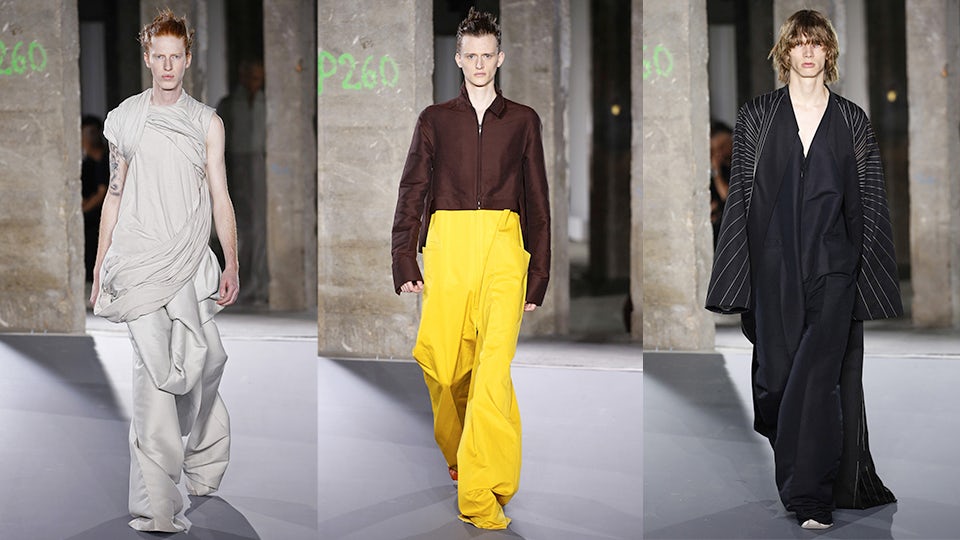 View Collection As for the rest, Paris was a wasteland of non-invention and naked kings. Rei Kawakubo, ever the prankster, shouted it out loud and clear with a show inspired by none other than Hans Christian Andersen’s classic tale “The Emperor’s New Clothes.” 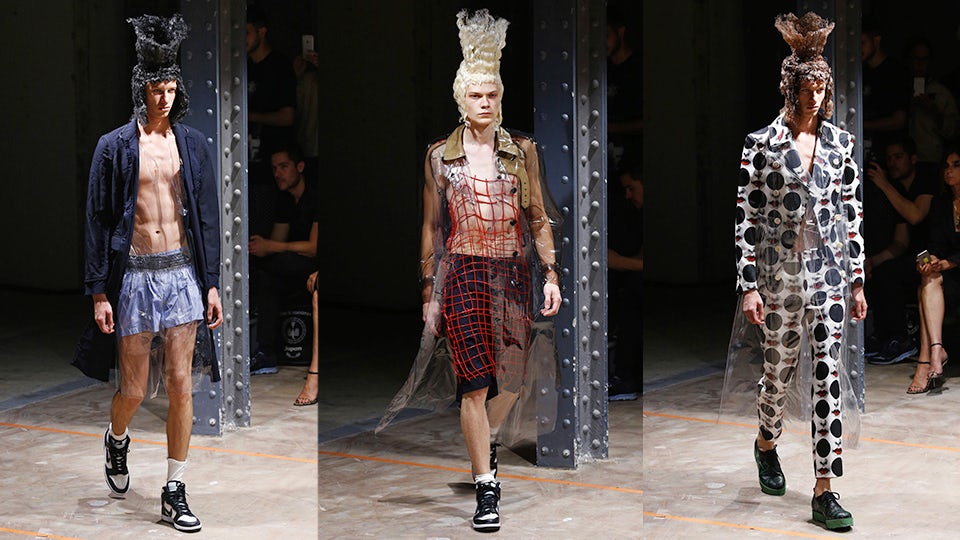