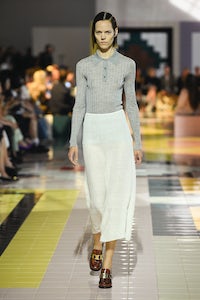 MILAN, Italy — All the sophisticated technological gambits in the world have brought us to this. They promised a quantum leap in consciousness and connectivity. Instead, they gifted us Zuckerberg and Bezos and Brexit and Trump and a coterie of phoney strongmen who burnish their egos and plump their bank accounts while the Amazon burns and biblical storms swamp the planet. Now hope lies in the innocence of a Swedish teenager and the millions of children around the world that she has inspired, their futures torn away by antediluvian robber barons in the name of short-term profit. But Greta Thunberg is extraordinary proof that naïveté can speak truth to power.

This isn’t to say Miuccia Prada is innocent. She has a past of fierce political activism, and her recent collections have simmered with anger. But her show on Wednesday night drew on a different energy. It was so Zen-serene that it could almost have been a collection for the end of the world, or at least the end of the fashion industry. It was deliberately naïve in its simplicity. Miuccia said that she’d originally wanted it to be even simpler but, in the end, she loved fashion too much not to introduce overtly fashion-y flourishes, like the graphically patterned knits. Still, she insisted the opening look was her favourite. That was Freja Beha Erichsen in a ribbed grey top, a gauzy white mid-calf skirt and loafers, with Guido Palau’s boarding-school-strict side-part. No extraneous detail whatsoever. I can’t imagine what could have been simpler, short of nudity.

The gently lyrical soundtrack from longtime collaborator Frederic Sanchez drew on various permutations of the French group Air’s career. With that in our ears, it was hard not to feel the humanity in Miuccia’s collection. “In this moment where everything is excess — too much fashion, too many clothes — I tried to work it so the person is most important,” she said afterwards. And how did she achieve that? By making each woman complicit in the clothes she was wearing. OK, I might be overstating that, but it really wasn’t so difficult to imagine someone collecting shells to make her own necklace, or whisking up a skirt from a piece of muslin. (She’d scarcely even need to hem it. Miuccia didn’t.)

That wasn’t the whole story. There were mosaic -patterned knits and jacquard pantsuits. There was also a gold leather suit with a three-quarter sleeve, and the most gorgeous scarf-backed black dress, like something Adrian would have designed for a Golden Age of Hollywood diva. But these looks felt like an old-time adjunct to the main story, like a backwards glance at an era that had already been co-opted by the beautiful body of the collection. “More simple, less useless stuff,” said Miuccia. Her hats looked made from scraps (albeit python and gold leather). There was a tippet of crushed velvet, and a curlicued high heel that might have been extracted from a bag of goodwill castoffs. Giving new life to old bits and pieces — it’s what these overloaded times demand. Nothing need be as disposable as we have allowed it to be. And fashion figurehead Miuccia Prada made the most irresistibly simple, elegant case for that point of view.