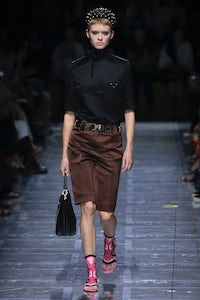 MILAN, Italy — Miuccia Prada is angry. The woman has props in political activism, after all, and right now we’re gazing into the maw of a resurgence of political populism that is enough to chill her blood. “What worries me is the simplification,” she said after her hard-hitting show on Thursday night. “Even politics is run by slogans.”

The obvious antidote to simplicity is complexity. Miuccia turned her show into an intricate confrontation between liberation and conservatism. If conflict is truly the essence of drama, then this was the most intense collection of the season to date. The setting — a massive concrete bunker at the base of the Torre, the final piece in the puzzle that is the Fondazione Prada — was appropriately harsh.

So was Frédéric Sanchez’s gigantic, pounding techno soundtrack, with a particular emphasis on Terence Fixmer’s revisit of the machine-age classic “Warm Leatherette”. A reminder here that such sounds once scored expressions of exuberant youthful dissidence like the Love Parade in Berlin and Trade in London.

It was tempting to see this show as some kind of Trojan horse. The subtext was subversion: buttoned-up propriety subtly undone. Or not so subtly, in the case of the naked bodies decorously covered with paillettes in some of the prints. Every model had a church-ready turbanette and prim bangs. But for everyone in a princess coat with a handbag slung over her arm, there was someone else in a black leather a-line suspended on tiny straps.

Miuccia’s appreciation of fashion fetishism was shaped by the master Yves Saint Laurent, and she exercised it to the max here: sheer knee-highs, straps, peepholes, revelatory tulles, sinister scales of black paillettes. It may simply be my fantasy that Miuccia was reanimating the notion of sex as a weapon — an idea as old as “Lysistrata” — but the freedoms she endorses are so threatened by the resurgent right that it maybe wasn’t such a fantasy after all.

Her militant mood was inescapable. Look closely and some of the models were featuring a pale simulation of Alex the Droog’s eye makeup from “A Clockwork Orange”. Girl droogs? Now there’s a message to send to men. Resistance comes in strange, unpredictable forms.

Prada: Making the Most of its Moment