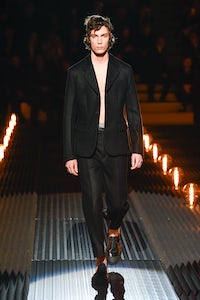 MILAN, Italy — Men are monsters. Several millennia of human civilization offer sufficient proof. And recent history provides its own contemporary gloss on the situation. But you wouldn’t necessarily expect such a notion to rear its head during a set of fashion shows benignly dedicated to proposing clothes that men might like to wear next autumn. Unless, perhaps, the designer provoking the rearing is Miuccia Prada, long known for offering ambiguous interpretations of modern masculinity.

Her mood has darkened considerably over the past few seasons. The culture she loves is denigrated as elitist. Intelligent, rational thought is under attack from political populism. Miuccia acknowledges that, as the figurehead of a luxury company, it’s hard to translate what is happening without seeming pretentious. She has to be careful about what she says. Still, the work talks for her. And what it said this season was HORROR!

It’s not simply that men are monsters. They make monsters too. Doctor Frankenstein’s creation was the presiding spirit of the Prada collection. And this most fundamentally Gothic of all tales cast a long shadow over the show. The dominant graphic was a lightning bolt, channeling animating electricity to a heart. The set was almost like a lab, foam rubber flooring studded with huge filamented lightbulbs. They should have been crackling. Instead, there was a blast of the “Rocky Horror” soundtrack as a reminder of how the man-plays-God trope has insinuated itself into popular culture. Frankenstein’s monster himself appeared as a lurid print, alongside blossoming flowers of evil.

There was an element of Hollywood campery in this. It is, after all, the Boris Karloff incarnation of Frankenstein’s monster that we’re recognizing. And, post-show, Miuccia was talking about an upcoming season of Japanese horror films at the Fondazione Prada, curated by a famous director whose name she was not at liberty to reveal. She claimed it was her own imagination of “trashy horror films” that sparked her latest men’s collection.

But the sensation of horror runs much deeper than trash, and it was obvious from her words that Miuccia’s real interest lay with Mary Godwin, who authored the original Frankenstein story. Wife of Percy Bysshe Shelley, friend of Lord Byron’s, this extraordinary woman was at the heart of the Romantic movement but she was compelled to publish anonymously (people assumed it was her husband’s work), an instance of the kind of put-upon womanhood that is guaranteed to raise Miuccia’s ire.

Yes, the male models sported Byronic curls, and bare chests under their immaculately tailored jackets (not a frilled shirt in sight, thank the Lord), but the romance was twisted every which way. “Do Ya Think I’m Sexy?” was on the soundtrack, disco-fied male arrogance in all its Rod the Mod peacockery, but here ground to an industrial pulp by Revolting Cocks (now there’s a band name to conjure with). Followed shortly by Marilyn Manson’s version of “Tainted Love”, where it was clear the taint had turned to terminal disease. Godwin’s revenge.

In such multi-layers of suggestion does a Prada show take shape, and this one resolved itself in a surge of militancy. Prada proposed its very own MA-1 jacket. An orgy of bellows pockets decorated jackets, pants, a skirt paired, in a typically perverse Prada gesture, with a sweater in lilac mohair traced with crystals. On the women’s side of the show, Miuccia weaponised the cocktail dress. Kiki Willems accessorized hers with pink satin mules and a backpack primed for a forced march. You have to be ready to leave with your life on your back, Miuccia might have been saying.