In coming to fashion’s capital, it made sense that the fetishistic elements of Proenza Schouler's work should blossom even more. 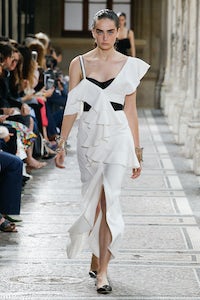 In coming to fashion’s capital, it made sense that the fetishistic elements of Proenza Schouler's work should blossom even more.

PARIS, France — The erotic undertow of Lazaro Hernandez and Jack McCollough’s early collections distinguished them from their New York peers. Achingly young though they were, their sensibility was adult in a way that felt more European than American. So their re-location to Paris, merging their resort and spring collections for their latest show, could almost be viewed as a spiritual homecoming. In its exaltation of the opportunities Parisian craftsmanship can offer designers, it certainly looked that way. Hernandez and McCollough availed themselves of all the featherers, ribboners, beaders, lacers and embroiderers they could to create a collection that ruffled and frothed with femininity.

“We researched all these little independent craft ateliers,” said Hernandez, “and we couldn’t help but be influenced by their commitment to beauty.” There was certainly some of that in the crushed red poppies embroidered on a white eyelet cotton top and skirt.

But where the collection really/= flowered was in the suggestive sensuality the designers brought to it. Long fitted skirts were slit up the back, and slung low at the waist to bare midriffs. Shoulders were also bared, by strappy, flounced tops. Sinuous knits were bound by leather bustiers. “We were going back to things we started with,” said McCollough. “Lots of bras and bustiers.”

If he felt their own preoccupations dovetailed with the traditional codes of French fashion, they also fitted with another fine French custom: dressing for the boudoir. The invitation, with its marabou trim, was an early clue. Sasha Pivovarova, in a marabou jacket that would have done Jean Harlow proud, sealed the deal. (Curiously, some of the models had Harlow’s finely penciled brows, though, this being Proenza Schouler’s Parisian excursion, it would probably be more relevant to namecheck a French actress like Arletty.) Then there were all the feathers, and the hook and eye closings, corsetry details bisecting tops and skirts. Should you unhook them, things would simply fall apart.

Fashion is fetishism, and Proenza Schouler’s designs have often mined that rich seam of association. In coming to fashion’s capital, it made sense that the fetishistic elements of their work should blossom even more. Ruffles of patent leather encased the feet of some of the models. Case rests. And if that’s a tricky idea to come to terms with, it’s no wonder the collection’s most commercial proposal — broad-shouldered jacket with a fitted waist, and a long, lowslung skirt, accessorized with flat shoes — still posed a challenge. Because the attitude (indolent sensuality) is not included.