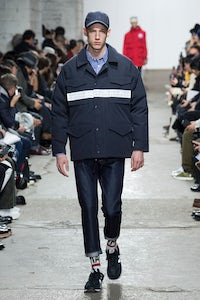 PARIS, France — At Junya Watanabe’s show on Friday, models headed down the catwalk in one look and came back in another. The penny eventually dropped. The totes, messenger bags and backpacks they carried were transforming into coats and jackets when they reached the end of the runway. It was the kind of function-into-form detail that has made Watanabe’s career one of the most consistently interesting in men’s fashion. His fetishization of American workwear predates by decades the current hybrids of work, street and sport that now dominate the market. And his collaborations continue to ensure his own clothes a real authority, backed up by his eagle eye for the tiny, true detail. In his latest collection, for instance, Watanabe drew on archive items from Canada Goose and The North Face, pieces of clothing that had already proved their functional worth.

Fetish inspires cult, as it has with his Japanese peers. But where they challenge orthodoxy, Watanabe elevates it. For him, beauty lies in the prosaic: the duffel coat, the parka, the anorak, the cargo pant, the button-down shirt. But he doesn’t fashionize them. The key detail in this new collection was a reflective strip, wrapping the waist and wrists of a navy duffel, lining the sleeves of a check carcoat, stretched across a utility jacket. “Functional decoration” was the title Watanabe gave his show, and there was nothing about the way he used the stripes that divorced them from their conventional usage. A man in head-to-toe Watanabe could pass you on the street and you might still take him for a municipal worker.

In the same vein, he borrowed patterns for knits and sweats from The Designer’s Republic, a British design group, and Italian artist Matteo Ceretto Castigliano who both specialized in industrial branding exercises. In their cases, the intent was satirical, and I’ll admit there have been times when I’ve wondered whether Watanabe isn’t also a supreme ironist with his exaltation of the banal, this latest outing being a case in point. But the strong and stable consistency of his vision – along with its immaculate execution - would suggest complete sincerity is his master.