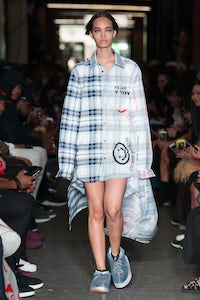 NEW YORK, United States — Backstage at Public School, co-designer Dao-Yi Chow was wearing a cap embroidered with "DACA Dreamers” in the style of the American Olympic basketball “Dream Team” logo — a supportive nod to the immigrants affected by American president Trump’s announcement that he would end the Deferred Action for Childhood Arrivals program, which currently allows those who illegally enter the US before the age of 16 to apply for the right to remain.

The cap’s link to the legendary “Dream Team” — which included professional NBA superstars like Magic Johnson, Larry Bird and Michael Jordan who, in 1992, were allowed to compete in the Olympics for the first time — added another layer of emotional context. It was quite gripping, actually.

The cap was certainly on-brand — Public School has an ongoing collaboration with Nike’s Air Jordan brand — but also exceptionally sincere. Especially as it was a one-off and not intended for sale.

The little piece of merch did, however, underscore what Public School was trying to communicate this season. “For us, it always comes back to community,” Osborne said. “If you don’t have that you don’t have anything.” Staged in the alley of a Chinatown arcade, a whiff of pizza-by-the-slice wafting over the runway, the designers played with the idea of take-out bags, embroidering sweatshirts with their own smiley face (accompanied by the words “Come Again”) and printing nylon overlays with the venue’s address. Seatbelt buckles etched with “Public School” strapped in an anorak; cinched drawstrings gave shape to a miniskirt.

Chow and Osborne are building a democratic brand. Once again, they made it possible for the crowd on the street to see their show, setting it up so that the models had to dip out onto the pavement in order to make it onto the alley-cum-runway. But once again, they also made it difficult to understand why these onlookers might want to save up to buy what they’re selling. While their partnership with Air Jordan is compelling — this season’s basket-weave Air Jordan XV in olive green in particular really popped — they need to move their ready-to-wear forward. If only their big ideas came through more clearly in their clothes.