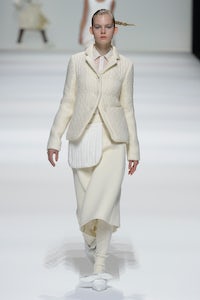 MILAN, Italy — Running themes throughout this season have been protection and safety, logical responses to the climate of crisis that is wracking the present. But, in their second show for Jil Sander, Lucie and Luke Meier projected those ideas into the future, to a life beyond all this chaos. Or at least a future as it was imagined by the past, particularly in the sci-fi classic “2001: A Space Odyssey,” where a spiritual rebirth was achieved by transcendence over technology. Luke admitted to a nostalgia for that future. “It’s possible again,” he said optimistically.

So maybe the serene beauty of the collection could be construed as quiet optimism. The models were cocooned in monochrome, white, black, grey, but also head-to-toe cerulean, tomato and celadon. Some of them carried baby duvets. Others were swaddled in them. Softness reigned supreme. “The fabrics cocoon on their own,” said Luke. Even a corset detail came in felt, softening the idea of restriction.

The other decorative element was a wallpaper-y print which, woven in purple lurex, had a rococo edge. I thought of the room where the astronaut David Bowman ends up in “2001,” surrounded by relics of human civilisation. That may sound like an Ingrid-it’s-only-a-movie stretch, but it wasn’t so far off what the Meiers were thinking too. As much as there was a spirit of optimism, there was inevitably the melancholy that attaches itself to nostalgia. You scarcely needed Leonard Cohen croaking “Bird on a Wire” on the soundtrack to remind you of that. Equally melancholic: the square of white plastic that accompanied the invitation. As a reminder of environmental crisis, it unwittingly amplified the point the Meiers were making about the need for a new consciousness.

Sidebar: like Missoni earlier in the day, the Jil Sander show was maximally enhanced by showing the men’s and women’s collections together. Compatibility to the power of 2!