FLORENCE, Italy — Let's put this one bluntly: the chaos that has taken over the fashion system — a confusing, exploding, dazzling, infuriating agglomeration of everything and nothing pointing in a zillion different directions, simultaneously — is particularly apparent in menswear. It was clear at Pitti Uomo, the fair-cum-compact fashion week that closed yesterday in Florence.

There was everything on show, from Gosha Rubchinskiy's angst-ridden, Italian-stamped brand of post-soviet underage athleticism to Raf Simons romantic take on the poetic quest for self determination through sexual expression — think a young Robert Mapplethorpe slowly delving into the forbidden pleasure of S&M; from Fausto Puglisi's testosterone-fuelled foray into Roman machismo with a pornographic tingle to Lucio Vanotti's serene take on minimalist classicism and Visvim's Japanese interpretation of vintage Americana. Not to mention, of course, the wider than wide offer between the stands at the fair, ranging from traditional to contemporary, and back. Menswear, right now, is all about little islands: perfectly formed style monads that do not necessarily communicate one with the other. 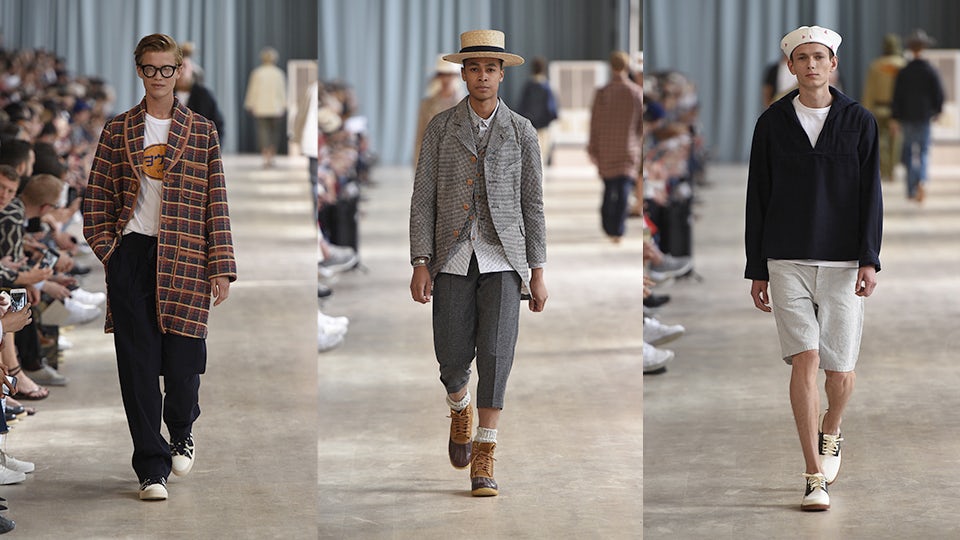 This is hardly a surprise. Pitti, which this year reached edition number 90, is traditionally a multi-sided affair. While the fair itself concentrates mostly around tailoring and sportswear, the satellite events that attract the crowd of die-hard fashionistas run an expansive gamut of forward-thinking visions. Many of fashion's big players — Raf Simons, for instance, who has a long-standing association with Pitti, or Rick Owens, who showed menswear in Pitti when the idea for him was just an embryo — had defining career moments in Firenze.

Others, such as Rubchinskiy this season, graduated here from niche to mainstream. The force of this event strives on a poignantly Italian mix of adamant tradition and fearless innovation, and of an organisation counting on a far-sighted team of scouts constantly looking at fashion's big picture in order to get the pulse of the moment. 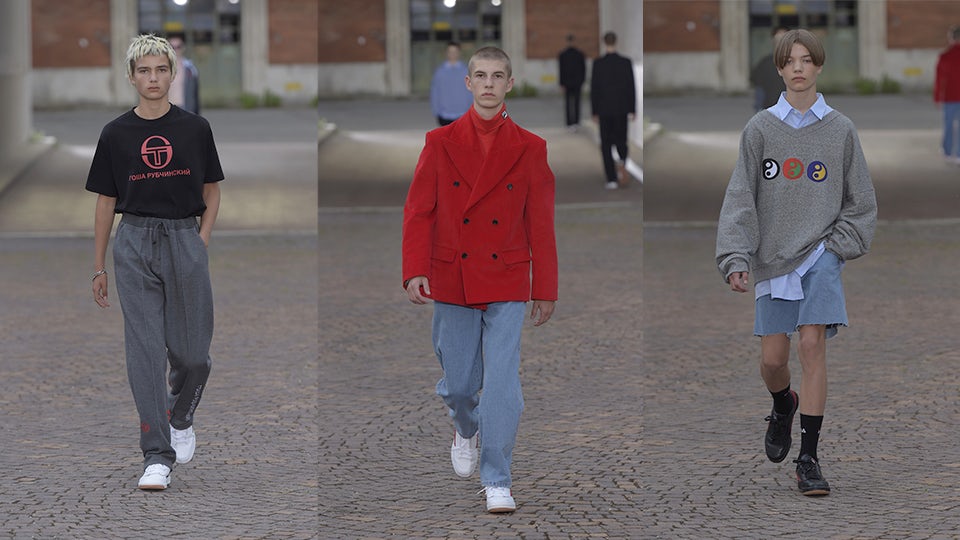 I must admit that, given the general shift — largely and timely induced by the self-appointed Russian Mafia New World Order — from formalwear or roundabouts to a gritty explosion of urbanwear, I was prepared to witness a general debacle, or diffused creative depression, among Pitti's die-hard classicists. Which, actually, did not happen, not least because true classicists — Lardini, for instance — have a natural way to incorporate what's new and digest it, adapting to the changing times maybe by simply suggesting an easier, slightly informal take on dress up. A formula that, so far, has been wonderfully pioneered by the brilliant Massimo Alba.

Secondarily, now that sportswear is the thing — a shift that is so focused on super-young customers it practically cuts off most of the other age targets — tailoring finally turned into an affair for true connoisseurs. There were no bland nor make-believe sartorialists worth mentioning at Pitti, just authentic sartorial brands striving for their core business and doing it with panache: Ernesto, Brunello Cucinelli, Tagliatore and so on.

Enough with the fair. Evaluating fashion as part of the broader cultural landscape is in fact quite hard when one just looks at clothes on a rack. This is why a fair can look so gruelling, and sometimes even pointless, to the eyes of a critic. Because it's when fashion turns to all-encompassing image-making that the goings get really engaging. What makes Pitti special is that it has both: there is product aplenty and visions in abundance.

Speaking of which, this edition pointed out clear and loud that truly progressive designers today aim at acting like sub-cultural leaders. It's all about the gang mentality: fashion that satisfies the tribal and primal urge to belong, thus conform. The client is either in, and buys the aesthetic and the clothes, or out, and buys somewhere else. The power of fashion to create a group and a bond, after all, is potent. It generates affiliations and the sense of safety given by numbers of people sharing the same code. This is why the insular and subcultural approach to fashion-making is such an effectual marketing and creative tool: it draws in and reassures. 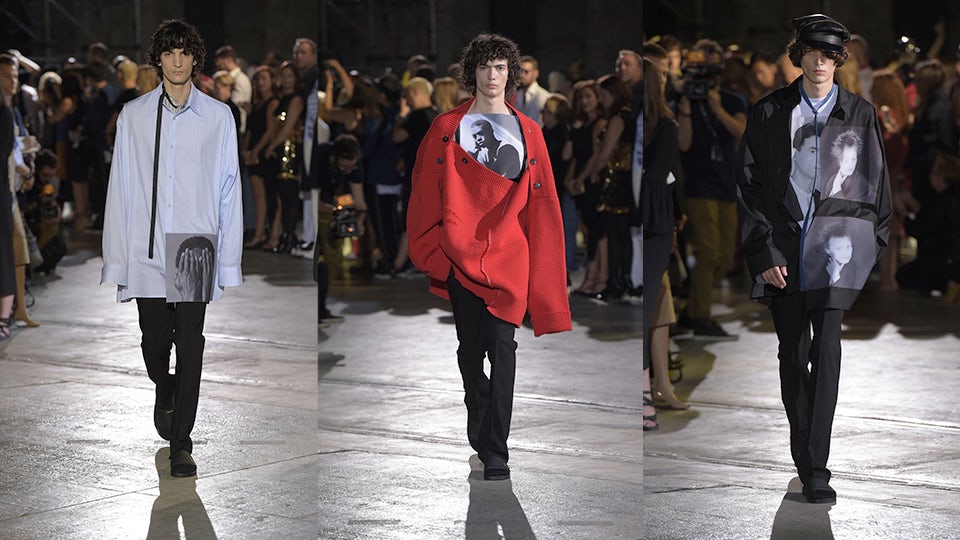 The designer-master who invented it all is, of course, none less than Raf Simons, who in his late 40s is still able to catch the electric frisson of troubled youth and convey it poignantly in tightly-edited, largely-influential collections. His oeuvre is coherent as much as it is layered, and the retrospective exhibition that functioned as the set of yesterday's show offered proof. Amongst neon bars and towering scaffolding, broken female mannequins were decked in a compelling florilegium of Simons’ best moments, almost as if to remind the disciples — Gosha, in primis — who the real originator is.

On another note, however, it seemed like Simons was not challenging himself fully, as he usually does — ultimately playing it safe in spite of the bold coming out of sorts and the intelligent delving into the territory of wearable art. With their mixture of poetry and perversion, the oversized shirts worn with dangling chokers and leather aprons were a joy to behold, though, just as much as the layering of cropped, voluminous tops.

Sex made for a potent subcultural melting agent also in Fausto Puglisi's kitschy, muscular menswear debut. Relying on a striking casting of convicts and Calcio Fiorentino players — think muscles, tattoos and more muscles — and opting for a mix of baroque and urbanwear, Puglisi went Gomorrah — Neapolitan outlaws showing off flash and cash — in a no-holds-barred celebration of pompous, hyper-physical, ultimately irresistible masculinity. Versace is Fausto’s template, that's for sure, but Puglisi is no mere copycat: there is lively authenticity and true passion to what he does, which is moving. 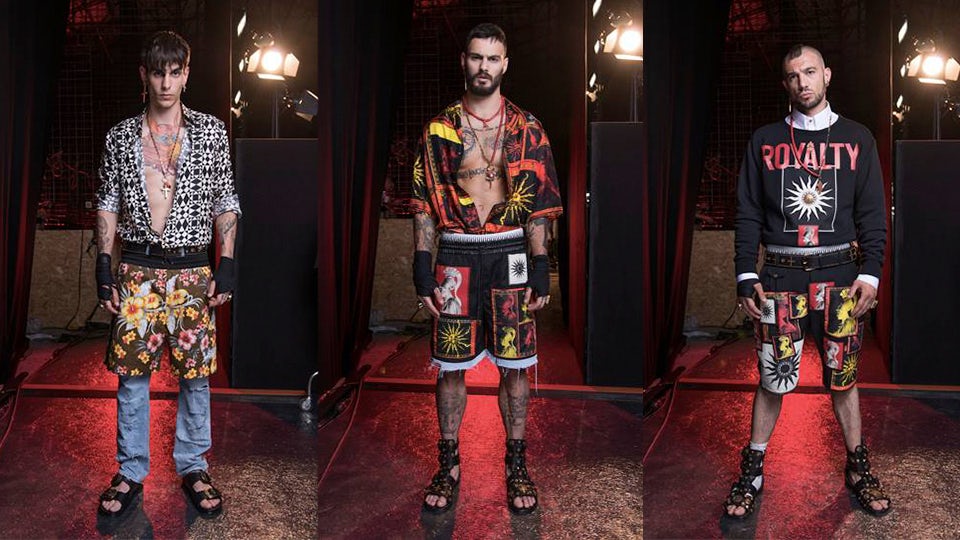 In comparison, Gosha Rubchinskiy's mix of boxy tailoring and logoed sportswear with a hand-me-down feel had something morbid, almost deadly, about it, and not only because of the Pasolini inspiration and the underage Instagram casting.

The subculture Gosha gathers — and he certainly does, to great commercial success — looks like a replica of a moment — Russia's post-soviet ‘90s — that by now is sealed in a lost moment in time. Bringing it back is kind of nostalgic, not least because the experiments are quite pedantic and, style-wise, literal. Rubchinskiy's work is certainly innovative in the deliberate choice to keep the price point low and the design basic, but somehow one feels a certain cynicism, and a lack of emotion, not to mention lightness and humour, in what he does. On the contrary, passion and emotion are fully visible in Rubchinskiy's pictures, which say a lot about his position as designer and image-maker.

Which, finally, brings us back to the topic of fashion and subculture, making it clear how difficult it is today to discern make-believe from truthful expression. Subcultures are somehow spontaneous, in fact, while contemporary fashion, as mere commercial act, is generally not. One way or another, today it's the image that wins, and the more impactful the better.

As for soul, it's a rarity to find, but we keep on searching.