Whether or not the experiment got the media attention designer Marcus Wainwright was hoping for remains to be seen but it worked in the room.

NEW YORK, United States —Rag & Bone stopped staging runway shows years ago. Good on them. These are not clothes that beg for a critical eye to decode. They are cute. Sporty. Just a little bit sexy. Military details, Saville Row-inspired tailoring and motocross silhouettes: that’s Rag & Bone for you. My work is done. 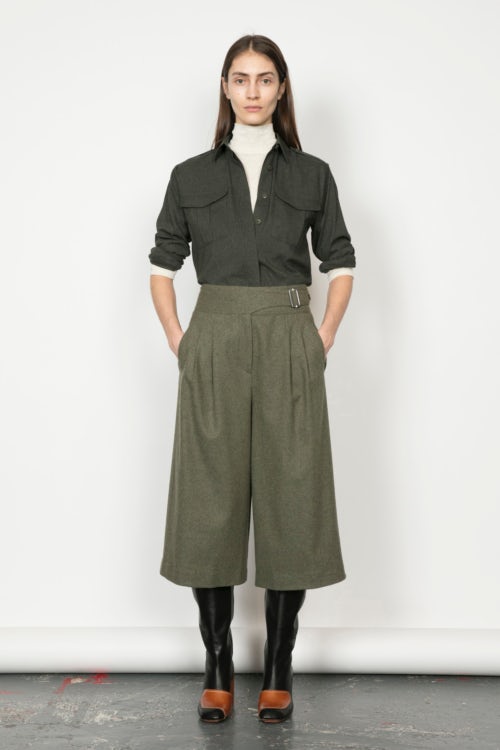 So how does a brand like this — one that has made its fortune by going mass — generate buzz? For Marcus Wainwright, Rag & Bone’s co-founder, former CEO and designer, embarking on creative projects with his cool-and-famous friends is his natural inclination. He’s created a short film with Mikhail Baryshnikov, soundtracks with Thom Yorke, a look book of self-portraits starring friends of the brand including actor Bobby Cannavale and Maye Musk.

This season, however, he took things to another level. On the Friday of New York Fashion Week, Wainwright invited 50-or-so guests to Williamsburg Savings Bank in Brooklyn for dinner. However, Instead of watching fashion while eating at a table constructed by the brand’s in-house carpenter, they were the fashion show, each wearing a new look from the fall collection. A strange inversion to be sure.

But this was far from the only entertainment. Wainwright enlisted set designer Christine Jones, whose credits include the immersive theatre piece Queen of the Night and hit musical Spring Awakening, music producer Nigel Godrich and an “artificial intelligence system,” voiced by Yorke, to cohost the evening with him. The team also collaborated with favourite New York chef Ignacio Matta and cookbook author Tamar Adler, as well as choreographer Damian Jalet, who took care of the performance. Immersive, it was, from the moment the guests were escorted to the grand long table to the performers gently pushing sprigs of rosemary under your nose during dinner.

The AI? Too abstract to enjoy. The menu, which began with ripped-apart pieces of wood fired flatbread and cake slice-sized slabs of butter? Quite a pleasure. The performance? Engrossing without being a nuisance. But what was most impressive was the crowd. They were cast so perfectly: Justin Theroux sitting across from Oscar Isaac, Atlanta’s Lakeith Stanfield chatting with André Holland, the star of the new Steven Soderbergh-directed Netflix film High Flying Bird. Matthew Rhys and Keri Russell, Michael Pitt and Liev Schreiber. Models, but only the interesting ones. An advertisement for the brand, without having to spend the millions it would take to book such a crew. Wainwright said that the event probably cost half as much as what he typically spent on a runway show, and that he didn’t pay any of the guests to attend or wear his clothes.

Whether or not the experiment got the media attention he was hoping for remains to be seen. But it worked in the room.