This season was less about fashion and more about the reality of life suddenly piercing the secluded worlds of fashion designers, reports Angelo Flaccavento.

This season was less about fashion and more about the reality of life suddenly piercing the secluded worlds of fashion designers, reports Angelo Flaccavento.

MILAN, Italy — “This season the message is not the fashion,” said Francesco Risso, perched on a chair at Cinema Anteo after the live streaming of his prismatic and engaging ‘Marnifesto’ tranche-de-vie show. In newly bleached curls, smudged eyeshadow, a leather coat scribbled all over, a frayed silk dress and high heels, Risso was looking very fashion. But the Milan fashion week that closed yesterday — part physical, part digital, please let’s ban the word phygital — was not exactly about the fashion. It was about searching for new ways of communicating, about adapting to the new industry normal and, above all, about the discombobulating reality of life suddenly piercing the secluded worlds of fashion designers.

The fashion was there, too, but given the rather extreme conditions under which these collections were conceived and created, with the process begun in the thick of the spring lockdown, designers largely stuck to their respective formulas with trimmed down collections — over-the-top, colourful, glistening, gloriously sexy seduction-wear at Versace; camel trench coats and faultless working attire at Max Mara, for instance — if maybe adding something more crumpled and tactile. It was all very organic, from No.21’s newly found sense of chaotic urban sharpness to Philosophy’s art attack jumble of stained painter smocks and milkmaid dresses; from Ports 1961’s ode to womanly draping to Tod’s sun-faded plein air sophistication. Overall, focusing on nothing too outlandish was a good choice, all things considered. Fashion as an exercise in glorious in-your-face escapism, operating in its bubble, seems slightly out of sync with the moment. Silly fashions, here and now, would only serve to solicit negative reactions from the public. We may soon have some new form of crazy escapism — at least, that is the hope: there’s thirst for ideas and fashion with a capital F, and hard times are usually fertile ground for letting it all go and embracing everything bonkers — but this moment is a transition period, an in-between, and it needs to be judged as such. This is why the attack on Milan Fashion Week printed in Le Figaro on the first day of the shows seemed a bit unnecessary, and maybe a tad vile. Of course, fashion capitals all over the world are struggling, but now more than ever before unity would help. The atmosphere in Milan was a bit surreal, of course. Half of the familiar faces were missing, and when they reappeared in puppet form at Moschino, they looked like scary ghosts from another time. But the energy, overall, was positive. Italians give their best in absurd situations, and this fashion week was managed in the most attentive of ways in terms of virus protections. Let’s not call it a triumph, but it was an eerily uplifting five days.

The fact that there was a fashion week in itself was commendable. Truth be told, the socially distanced shows with a reduced audience were quite a joy, devoid as they were of all the poseurs, the wannabes, the influencers and all those denizens of the enlarged fashion-land who are there just to promote themselves. Instead, we, as professionals, were there to look at the clothes and work: an approach worth keeping in mind for the future. Elitism? No, professionalism. 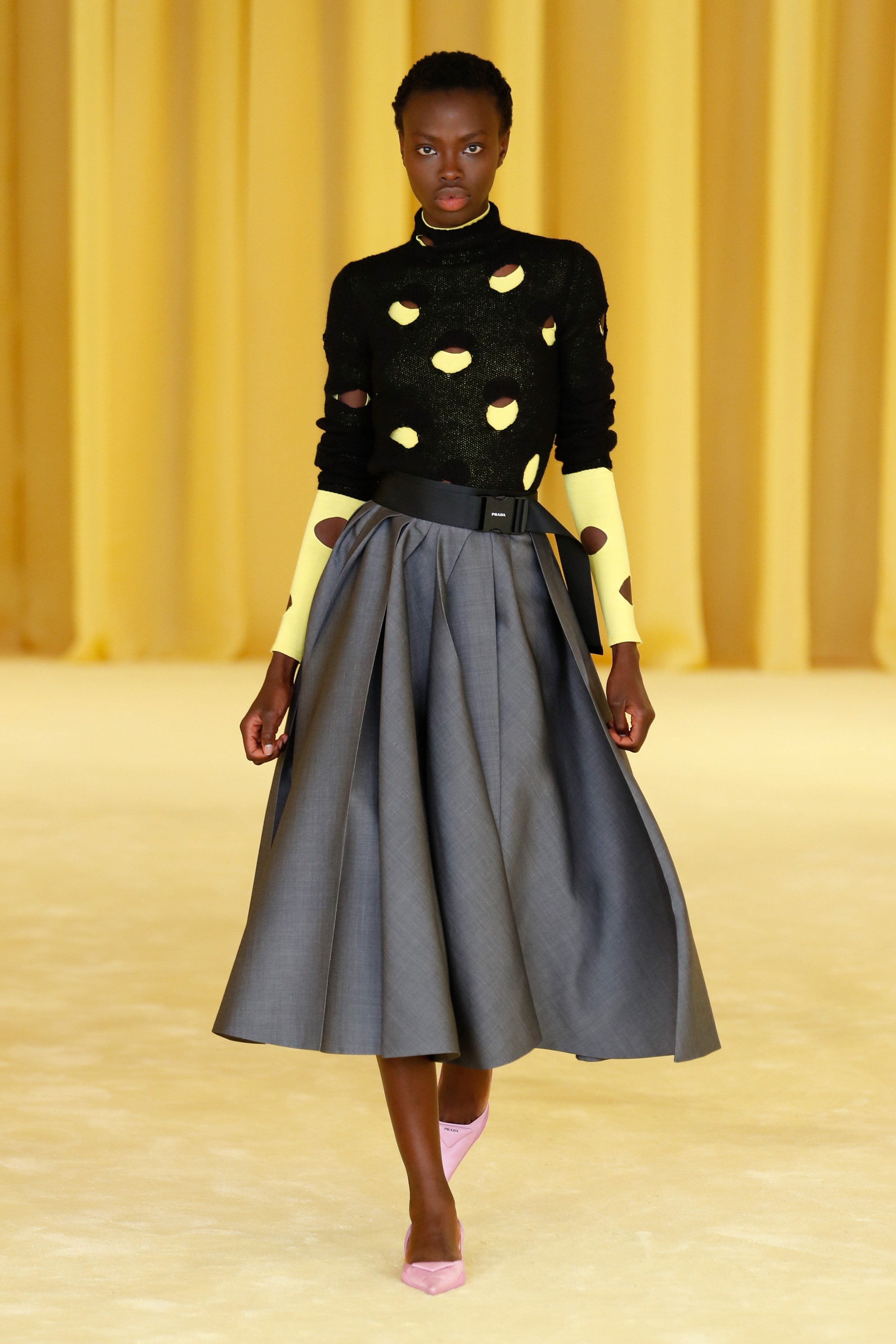 And yet, there was no breakthrough fashion to be seen, not even at Prada, one of fashion’s prime enablers. In what was the most highly anticipated show of the season, the unprecedented debut of Raf Simons and Miuccia Prada as co-creative directors, what we saw, in slightly spooky video format — digital actually worked wonderfully as a mirror and channel of a collection that felt, well, a bit cold — was a blunt merging of two personal and distinct visions, but not a swift step forward. A bold experiment like this, of course, cannot be judged by the first outing. The partnership may take trials and errors to truly settle, if it ever does. Unbalance is not a bad thing, after all. For the moment, it felt like Miuccia’s twisted ladylike sense, including wrapped capes held with a hand on the chest, met Raf’s proclivity for teenage angst — hooded sweatshirts, Panorama bar prints — without totally merging. One thing was missing, for sure: sex, and with it, womanliness and power. What’s always been striking and unique about Mrs Prada is the fact that la Signora dressed women — that is to say grown-up, fierce and powerful beings. On her catwalk, even 17-year-old models looked like women. But the new Prada felt rather pale, sexless, transparent. This deserves further exploration, because Prada has always been ahead of the curve in empowerment. 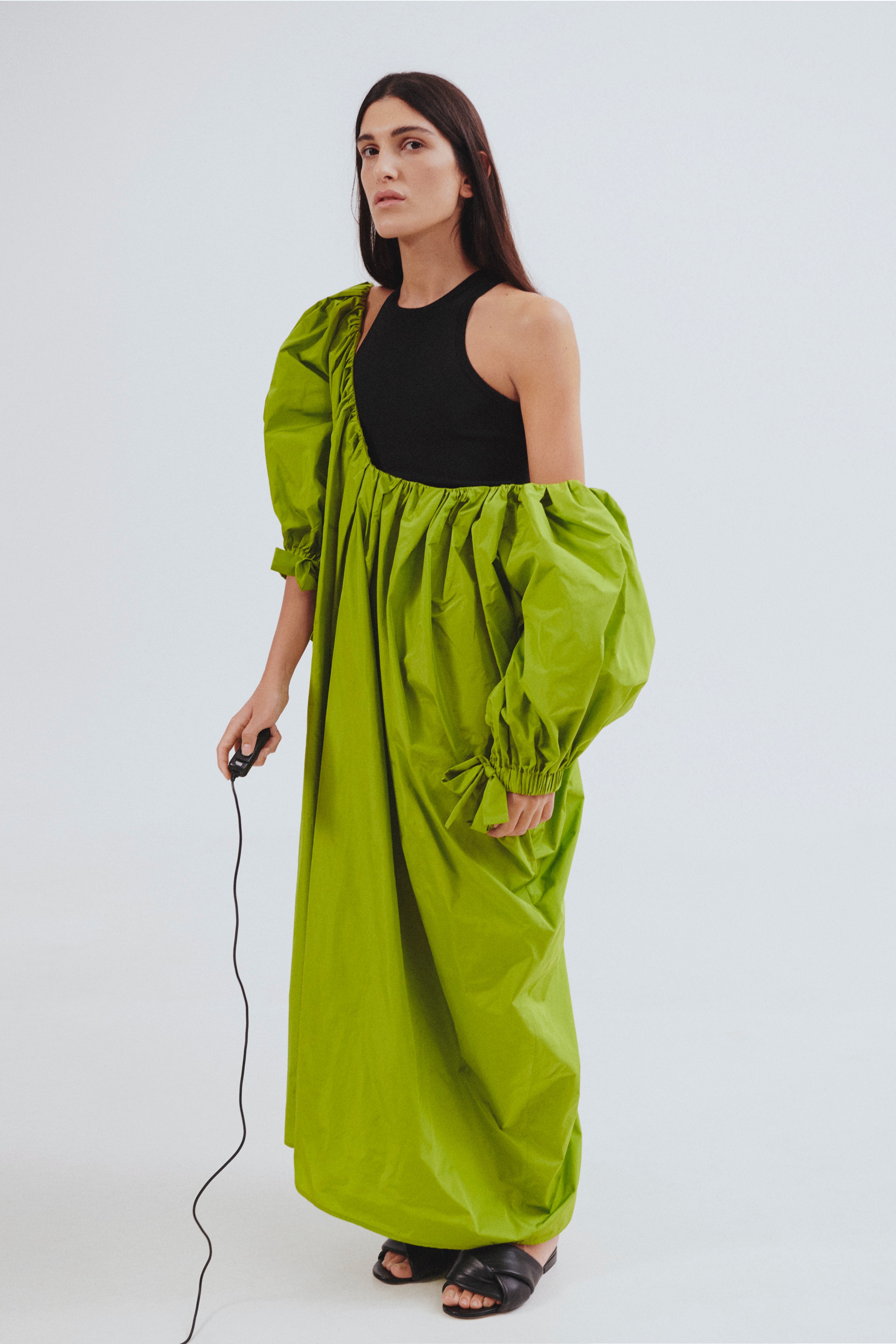 At MSGM, reduction brought a new focus to the clothes: bright, easy and fun, just as required. At Valentino, it was an exercise in what Pierpaolo Piccoli called “re-signification,” reshuffling the romantic codes of the house with a gloss of radical edge. It worked but needs further tuning.

But again, fashion was not the main current at Milan fashion week because it was all about fashion merging with the uncontrollable imperfections of life, and real people. It’s an old, perpetually fascinating trope: art meets life, which should really not be so surprising in the case of fashion. Past the catwalk extravaganza, after all, the art of fashion is meant to be worn by real people. And yet, when real people wear the clothes on the catwalk — or in a brand video — a shift happens, and the personality of the wearer comes to the fore, even if “real people” in fashion-land often means slightly weird-looking or ugly-beautiful.

Francesco Risso’s social experiment for Marni was touching and captivating: an act of fragmentation that speaks a lot about our current — and perpetual — fragilities as human beings. Risso worked on items and outfits, which he subsequently sent to 48 individuals, members of the expansive Marni community, to be personally interpreted in a kaleidoscopic show that was transmitted live, collaging bits of footage taken on the streets of the respective cities. The result was a chorus that highlighted Risso’s cut-slash-and-paste vision for the brand. And if, in Marni terms, the clothes were a bit of a deja-vu, who cares? 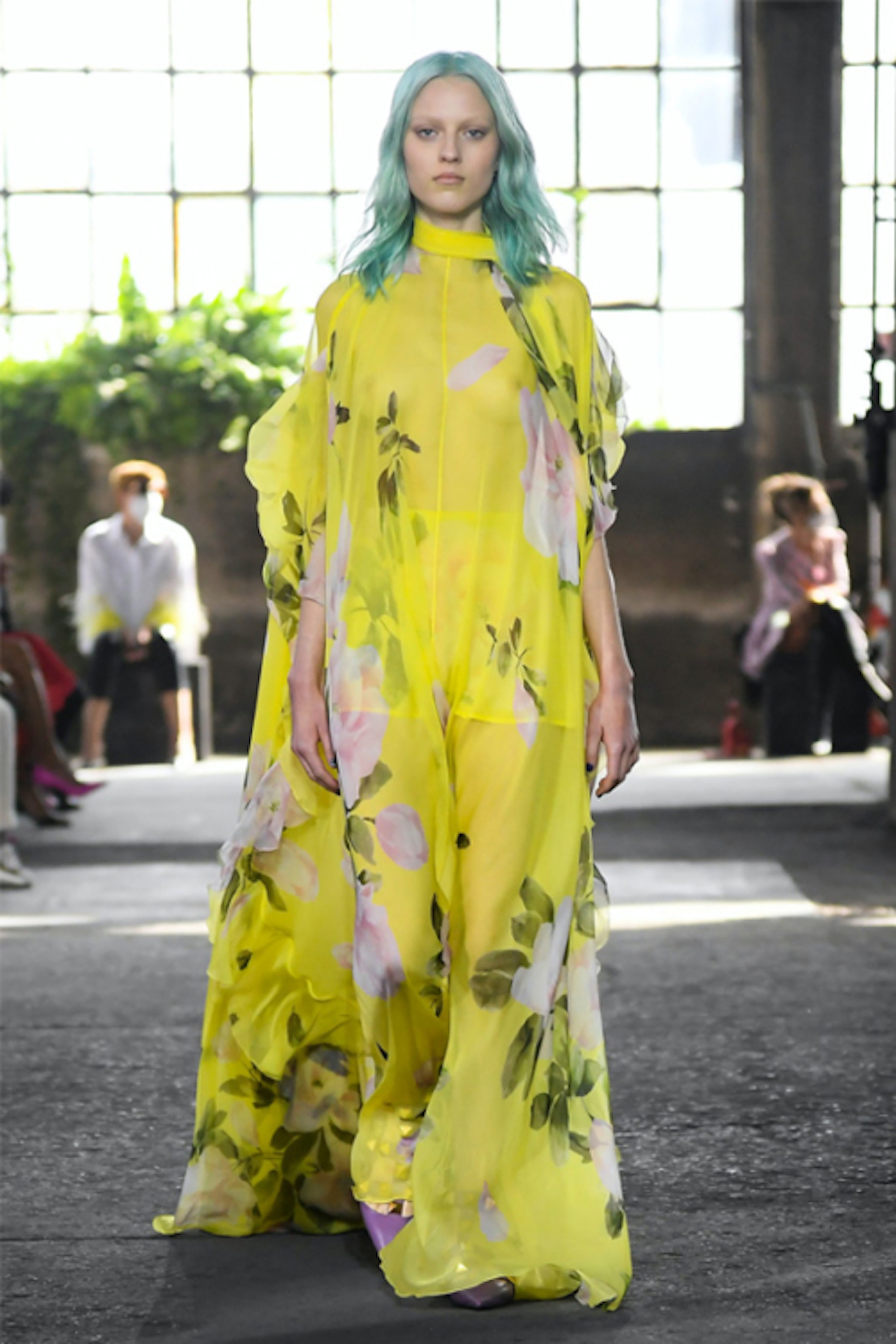 Opening up to reality, for Giorgio Armani, meant broadcasting the show live on primetime television, opening up the secluded fashion enclave to everybody. This was a marketing masterstroke, a nice way to maintain the direct communication channel with the public that Mr Armani opened during lockdown. As for the clothes, it was Armani being Armani: soft, greige and deconstructed to eternity.

The real versus the virtual: this was ultimately the central topic of Milan’s surreal fashion week. And while it was clear there is no way to replace the physical show, no substitute for live action seen live by a living audience, there were quite a few interesting experiments in the film format, ranging from the very old school puppets of Jeremy Scott at Moschino to the extra-fun virtual fashion arcade of Giuliano Calza at GCDS, even though the clothing became secondary, almost an accessory to the spectacle. 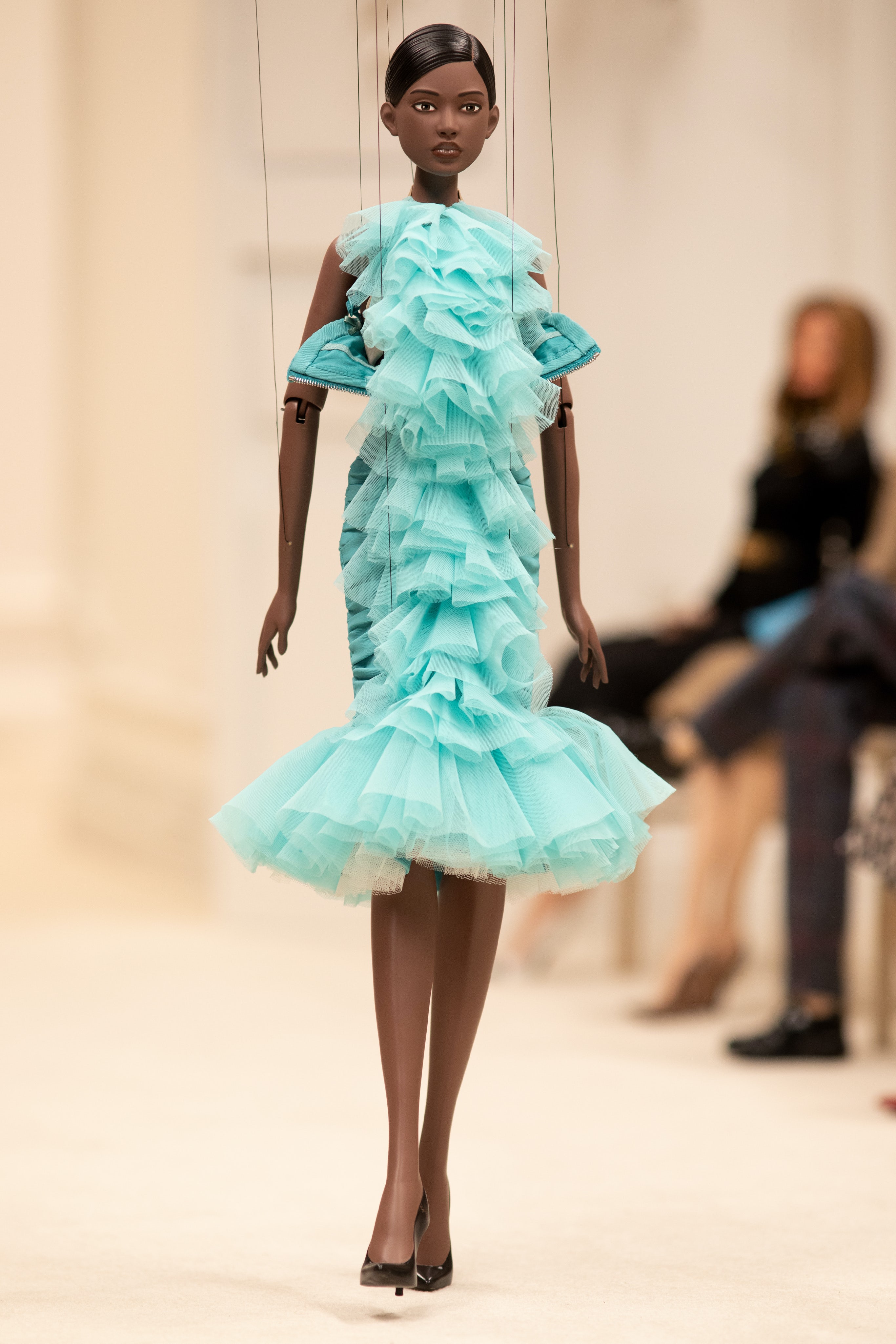 Emporio Armani’s Building Dialogues was a good example of how images and sounds, on video, can work in favour of the clothing — this was the most modern-looking Emporio in seasons — but a show, in the end, is a show. A show can be divisive — like Nicola Brognano’s proudly nostalgic, coquettish debut at Blumarine — or it can be quite simply gorgeous, in an all-enveloping, unique way, like Fendi, where the last solo outing from Silvia Venturini had everything fashion requires at the moment: substance, calm, sensuality and a warm feeling of familiarity. This is how fashion should reconnect with reality, for real.