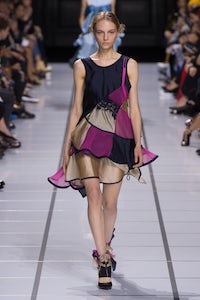 PARIS, France — It’s easy to remember the first time you saw a Sacai show. Chitose Abe’s hybrid forms were the quintessence of Japanese fashion avant-garderie, but they were also sexy and funny. And then you saw them lots more and familiarity dulled the initial impact. So it was Chitose’s challenge on Monday morning to re-animate the memory of that first time. Take it back to the source. Purify. To a large degree, that’s just what she managed to do.

From the first simple slip-like dresses with their fluted hems, there was a freshness, almost a girlishness, which animated the clothes. Sleeves tied across the bodice in a casual bustier looked like a stylist’s flourish but were actually functional parts of the garment, suspended from backpack straps. The glen check jacket swathing a poplin shirt dress in a banker’s stripe (with sleeves in the same cotton artfully jutting from under the jacket) was quintessential Sacai in the way that it simultaneously challenged and seduced.

Where Chitose has most often diverged from her Japanese peers is in the unabashed sensuality of her designs. Here, even when they collaged silk with traditional menswear fabrics, there was still a sinuous movement in the clothes, in lowslung skirts and pants, in body-skimming tops. And there has always been a sense of humour in Sacai, again something that you don’t always see in her peers. It was most manifest here in the distinctly utilitarian element of those funky big backpack straps, applied to floaty full-length dresses, where a simple spaghetti strap would have been the obvious choice. It was also here in Daisuke Gemma’s soundtrack, blaring James Brown’s "Sex Machine". And this season’s t-shirt message: BEWARE (IT’S) EVERYWHERE. Meaning that you don’t need to go to the ends of the earth to find inspiration. Everything is right here, in front of you. Sacai, in a nutshell.