Sarah Burton's ability to winkle such glorious oddities out of the swamp of the past means her McQueen collections are never less than dream fodder. 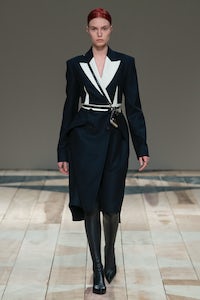 Sarah Burton's ability to winkle such glorious oddities out of the swamp of the past means her McQueen collections are never less than dream fodder.

PARIS, France —  Engagement vs. escapism. Sarah Burton was clear about which side she took in the fashion challenge. “Last season was extreme romance, this season, everything is in such crisis, you’ve got to feel armoured and protected to look after everybody else,” she said of her spectacular new collection. “It’s a love letter to all of us, women, family, friends, colleagues. It’s about how to walk in this world.”

To prepare, Burton went walking in Wales. “I love the poetry, the mists. It felt really grounded.” She also loved the houses painted red, for protection and healing. And, most of all, she loved the quilt she found in St Fagans National Museum of History. Made from scraps of fabric in the mid 19th century by master tailor James Williams, it was a masterpiece of craft, depicting an allegorical, almost Blakeian narrative of the times he was living in. Burton used it as inspiration for the patchwork pattern on a suit and a swallowtail coat. She was unnecessarily conscious of it feeling period. Williams’s quilt looked so modern, like some fabulous piece of outsider art, that it quite took my breath away.

But that period thing was obviously on her mind. True, an acute historicism has occasionally dogged her McQueen. That was where the romance came in. Here, she went bolder. Black and blood red. Leather. No ruffles. No frills. “How do I bring modernity into this?” she wondered. Fabrics were one way. The quilting in Fran Summers’s dress, as cosy as a house coat, was actually woven. There were coats and jackets cut from a dense wool silk that shaded to sheer organza in a single piece of fabric. A kind of magic. Burton loved that idea of transformation, the same way that women turned into birds or fish in old Welsh myths. Admittedly, these were pleasures only she was privy to, but I do believe that the power of McQueen lies in the heady suggestion of such otherness. Blissfully ignorant you may be, but you sense you’re looking at something that has a mystical significance. I’m quite partial to that.

Which means I was very taken by the lovespoons, traditionally carved out of wood to mark weddings and anniversaries. Burton duplicated them in guipure lace (you would, wouldn’t you?) and draped a few dozen of them off a showpiece worn by Adut Akech. Historicism or not, her ability to winkle such glorious oddities out of the swamp of the past means her McQueen collections are never less than dream fodder. But even a look as now-ish as a check blanket dress draped across a black leather bodice had a primal fierceness that stuck. I asked Burton about Welsh warrior women. It seems there must surely have been some, given the natural Celtic inclination to rebellion. Blodwen came to her mind. She took her children into battle with her.

And if Blodwen had had access to sound technology, she’d probably have taken John Gosling with her as well. He has provided the musical accompaniment to McQueen shows since time immemorial, and the witchiness of Monday’s soundtrack gave Burton’s designs a spirited tweak. It’s never too late to acknowledge those who contribute selflessly to fashion’s rich tapestry, especially when it is so endangered.