Virgil Abloh loves to re-contextualise clichés, but in this collection his eye for detail was unerring. 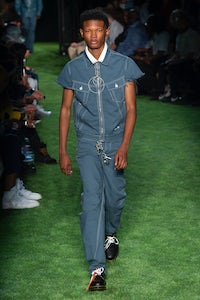 Virgil Abloh loves to re-contextualise clichés, but in this collection his eye for detail was unerring.

PARIS, France — “I’m Bart Simpson. Who the hell are you?”

Arch-brat Bart and his sound bubble were circled in flame on a sweater in Virgil Abloh’s new collection for Off-White. Like a contemporary version of that classic Marlon Brando line from “The Wild One." When a girl asks biker Brando, “What are you rebelling against?” he spits, “Whaddaya got?”

The Bart sweater had a discreet little “teenager” knitted into its backside. It wasn’t actually Brando who was the first American teenager. That honour fell to his acolyte James Dean who, in “Rebel Without a Cause,” played Jim Stark, the first crazy mixed up kid to define a whole new postwar demographic. So what did Abloh name his collection? “Jim Stark." And that’s because he wanted it to reclaim teenage. “I’m 37,” he said post-show, “but for me, teenage resonates with the youth core,” meaning the very heart of the constituency that has made him a culture-defining monster.

Further validation of that success awaits with Abloh’s debut at Louis Vuitton today, but, basking in the Off-White halo on Wednesday, he insisted he’d already been liberated by Vuitton. That was the grown-up Virgil. Here, with Off-White, the Chicago skater kid was free to roam once more through summertime Saturdays in New York, when “Dondi” White was the graffiti king, and jeans and T-shirts and a little creative DIY were all you needed to style out.

“Dondi” died of AIDS in 1998, not before he’d taken subway art into the gallery world. Abloh paid tribute to his graphics on T-shirts and on an over-sized coat. Maybe he recognised something of "Dondi's" facility to cross cultures in himself. His soundtrack started with Kraftwerk and segued into “White Christmas," "snow" falling on the catwalk.

But the collection itself was not that complex. Fundamentally, jeans and a T-shirt. Jim Stark’s uniform, in other words, and the uniform of every kid who followed in his tortured slipstream. “What can we do to make them feel new?” Abloh wondered. Volume, of course. Seaming, pockets, treatments. Distressing, obviously, but also lathering chambray with sequins. Or slapping on some Yves Klein blue. The shoes notably soft-pedalled the steroidal aspect of recent sports footwear. A couple of models backpacked transparent cases from Abloh’s recent collaboration with the luggage brand Rimowa.

Those last items were a reminder that Abloh loves to re-contextualise clichés. His eye for detail is unerring. Jim Stark and James Dean were defined by a red windbreaker, one of the most iconic items of clothing in Hollywood history. Abloh closed his show with his version. Maybe that flourish sailed over the heads of his audience, but Alboh knew that those in his particular know would get it. Teenage is timeless.