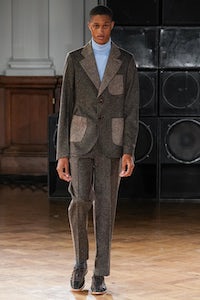 LONDON, United Kingdom — Grace Wales Bonner’s five years in fashion have been a work in progress in more ways than the obvious career path. She’s also been discovering herself. “Unfurling”, she called it after her show on Sunday night. “It was important I gave myself space to develop the brand, so I’ve been in my own bubble. Now I’m in a place where I can open up.”

She was obviously more relaxed. The taut watchfulness that once defined her media encounters had dissolved into smiles. She said she was “amazed and grateful” that she has inspired a generation of young designers in London. And she insisted her new collection was her most personal to date. A major inspiration was John Goto’s photos from the 1970s of young Afro-Caribbeans at the Lewisham Youth Centre in South London. They spotlit the mix’n’match irreverence with which second-generation Jamaican immigrants approached British culture and style. Lewisham’s high street was also where Wales Bonner’s father had his criminal law practice. The synchronicity felt like a kind of homecoming to her after a furiously busy time when global fame claimed her.

She called her collection Lover’s Rock, after the sweet fusion of reggae, soul and R&B that those Lewisham kids — and many likeminded spirits in the ’70s — made to reconcile their new world with their roots. Her collection was a similar fusion. The seductive slouch of a windowpane check suit, paired with a matching cap and classic Adidas sneakers (a Wales Bonner collab), felt like a sartorial expression of that lover’s rock hybrid. So did the skewed classicism of two-tone tweeds, or the spectacular officer’s coat cut from denim, with a trim of rasta green velvet running round its hem, or the striped kurta under a winter white blazer (again, the matching cap, Stephen Jones designing some standout headgear). Mod-styled ’60s tailoring met casual skinny knit tops, sharp and sensual, with a hint of the unexpected.

Wales Bonner showed her usual handful of women’s looks, jackets and pleated skirts distinguished by a quiet, almost prim dignity, grounded by Manolo’s Mary Janes. They can make you wonder where women sit in her world of young dandies. Maybe the women exude a quiet authority as they let the boys play. That would fit with Wales Bonner’s own persona. But she insisted that she herself is more playful now. Certainly seemed that way. And Jamie XX wrote her an irresistible soundtrack, lover’s rock with a skittering, upbeat pulse, to keep her in her happy place. He called it Dancewme. I’m old school. I’m thinking of it more as Wales Bonner: The Unfurling.