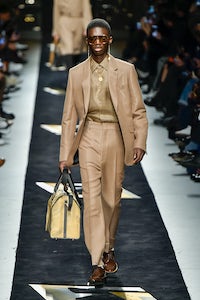 MILAN, Italy — Before the Fendi presentation on Monday afternoon, Silvia Venturini Fendi sat cross-legged on the floor of her very own green room backstage, shuffling through pictures of her models. “Today, the most subversive style is tailoring, to see young kids in a suit and tie,” she mused. If she has her way, Gen Z will be going formal. When Silvia was approached to do “something special” for Noah Schnapp, the 14-year-old star of Stranger Things, the first thing she thought of was a suit.

In menswear’s fashion cycles, formal follows casual as night follows day. But there was something different about this new incarnation of tailoring from Fendi. For one thing, it came with the imprimatur of Karl Lagerfeld. He’s been Creative Director of the house since 1965, but not until now has he dipped his toe in the men’s side of the business.

It was at Silvia’s invitation. As she pondered refashioning Fendi Man, she realized there was no one better to ask than Lagerfeld himself. “He’s my biggest fantasy of man because he’s the only Fendi Man,” she said. He has also, for years, been an apogee of sartorialism, from the time when he dressed in suits by Caraceni, through his arcane flirtation with the likes of Japanese label Matsuda, to the classicism of Hilditch and Key and his notorious physical transformation to accommodate the leanness of Dior Homme. “Karl has shown how a formal suit can stay with the times,” said Silvia. She wanted to use that as a starting point to meditate on his status as a suited and Cuban-heel-booted pop icon.

So she asked Lagerfeld to be Fendi’s latest guest artist and he answered her with the sketch of a jacket, notch lapel on one side, shawl collar on the other. Dualism. It’s always been the essence of Lagerfeld’s Fendi - a face-off between classicism and futurism - and it’s often been the motivation for Silvia’s creative directorship of the Fendi men’s collection too. She likes things a little off-kilter, a little disruptive, perverse, even. That inclination has yielded some spectacular collections in the past (a platform-booted Ziggy Stardust moment in the mid-Noughties lingers lovingly).

Here the dualism was manifested not just in those lapels with the split personality, but in a leather blouson impressively bifurcated front and back by zips, one side black, one side brown. Same effect with a suit jacket, or with knitwear, also bifurcated and designed so you could change sweaters back to front. And zips ran round collars and down sleeves. There were two logos, one Lagerfeld used in the 80s, the other he’d originally used in the 70s but brought back in the 90s (dualist, see?). They were printed on a billowing coat in an intricate collage that chronicled Karl and Silvia’s relationship over the decades – letters, photos, art, memorabilia, all the things that once arrived from Paris in big envelopes for her. “I used the collage idea to show how his mind works… and words, because he plays with words so well.”

The set for the show was based on Lagerfeld’s library, and some of the looks had a bookish tie-and-cardie, glasses-on-a-chain professorial tinge. The formality of his own dress was reflected in the unusual (for Fendi) amount of black in the collection, in the careful attention to shirt collars (all with a tiny monogram), and in the flashes of silver to suggest the jewellery he loves to wear, like the sportier pieces shot with metallic thread to create a pinstripe effect.

But, in keeping with the dualism theme, that sobriety was countered by a showier something, especially in the accessories (baguette bags for the boys!) and the use of sheer couture-ish fabrics, like the nylon organza of Paul Hameline’s puffa or the sensual silk organza that was cut into see-through shirts and pants. “We live in transparent times,” said Silvia. Was she sure about that? I wondered. “Well, we want to.” Anyway, she’s partial to politics. After the show, she and her family were off to see her favourite speaker, Emma Bonino, the maverick activist who headed Italy’s Radical Party.