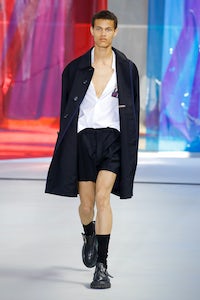 MILAN, Italy — "The days of streetwear are over for us designers. At least this is what I am working towards. It's time to deliver something more substantial than a bunch of sweatshirts — there are plenty of urbanwear brands that do it already, and very well," said designer Alessandro Dell'Acqua backstage at the No.21 show.

His thoughts are in-tune with those of Miuccia Prada, another purveyor of the sartorial antidote to the abundance of tracksuits and assorted lazy, easy pieces that have polluted the fashion lands of late. Other funny similarity: tailored shorts as the way out of the traps of sportswear, willing to rejuvenate formalwear along the way. It made for a consistent and very good show of wearable pieces with a kind of dry sensuality that openly and willingly nodded ad the 1990s. Another Prada similarity, the PVC raincoats, which added a welcome soupçon of weirdness to the whole.

Dell'Acqua deserves kudos for trying to move the fashion conversation forward — in Milan very few are doing so. The minus was the palpable Prada-ism: a trait that's a permanent glitch for Dell'Acqua, but one he should easily get rid of.