Daniel Lee’s sequined, chartreuse shift was a point of major demarcation. But the emphasis on physicality was a better indication of what his signature might be. 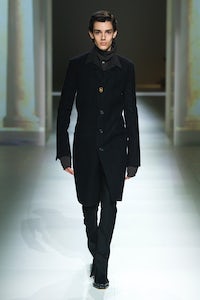 Daniel Lee’s sequined, chartreuse shift was a point of major demarcation. But the emphasis on physicality was a better indication of what his signature might be.

MILAN, Italy — Daniel Lee has always loved dance. Maybe if his chips had fallen differently, he would have ended up in a company, treading the boards at Lincoln Centre or La Scala or Sadler’s Wells. Instead, he’s helming Bottega Veneta, one of the world’s premier luxury brands. Not such a bad trade-off. But the flame still burns. Lee’s love affair with dance inspired his new collection. Stretch, elongation, movement were his motivations. Dancing forms crocheted into a spiderweb of netting were a particularly memorable takeaway. It’s a shame that the models didn’t bust moves to show just how easy it would have been to perform a ballet in Lee’s looks.

The set was a classical sculpture garden, projected on the kind of scrim you’d usually see dressing the stage for a dance company. Cost-effective there, but a huge statement about creating sustainable spectacle here. A set that leaves no physical trace? Tell that to the Chanels and Diors of the world. If you watched closely, the statues moved slightly, eerily. That theatrical flourish was a reflection of Lee’s faith that fashion needs to take us somewhere which isn’t here. Now, more than ever.

He opened with menswear: long, dark, high-waisted and lean. Elegant young princes. The same monochrome elegance carried over to the womenswear, except when it didn’t. The cross Lee bears is his years at Celine. That time spent in the Philo trenches makes him a target for the purists who obsess that nothing can ever be again as it once was, unless it copies. Lee’s sequinned, ruched shift in chartreuse was a point of major demarcation. But it was the emphasis on physicality that was a better indication of what his own signature might be. Adut Akech’s bared shoulders and covered arms, the backlessness of Fran Summers’s second-skin knit, the chain-lined scoop of Vittoria Cerretti’s knit shift…they billboarded the collection’s dialogue between restraint and release. When I spoke to him the other day, Lee acknowledged the power of sexuality in his work. It sure isn’t hard to imagine how that power bangs a gong with customers who can’t be bothered with parsing pussyfooting subtlety.

Lee’s Bottega has hit hard and fast with a couple of happy-accident handbags from the brand’s archives. Women all over the world are stroking their Pouches even as we sit here in our digital convo. Sensibly, Lee went back to the same source but, rather than subvert tradition, as he did when he exploded Bottega’s signature intrecciato leather weave (the explosion looked extremely desirable in the men’s gilet he showed on Friday), he chose to respect it this time with a nice big intrecciato tote. It was always one of the best-looking bags in the world. Still is.

Lee’s decision illuminated his smarts. When you’re the new guy in town, it’s best not to throw the baby out with the bathwater. He's a pragmatist, which only means he knows what happens when you’re hot. So it’s going to be interesting to see if Daniel Lee really can do no wrong.