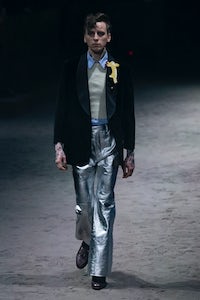 MILAN, Italy — Turning back time, learning to unlearn. They were the goals of the psychodrama staged by Alessandro Michele on Monday afternoon. On one level, it was professional. It’s been five years since Michele upended not just Gucci but the entire fashion industry with the menswear collection he showed for Autumn/Winter 2015. As a visual trigger, some of his models walked in the fur-lined slip-ons that were such a sensation back then. But in a press conference after his show, Michele talked about how the spontaneity of that moment had been subsequently weighed down with intent he'd never intended. “Even in a world as free as fashion,” he mused. He said this show had given him a chance to revise the past.

That revision cued the show’s other level, the personal one. Imagine years of therapy transposed onto a fashion catwalk. “Some of us go to a shrink to go through the experience of losing childhood,” said Michele. Maybe he did too. And he also has the resources to make a fashion universe out of his trauma. “I created outfits for the show that I wore when I was a child,” Michele said. “I wanted to be a child again, because childhood is a time when you can be yourself.”

Time. It was the star of the show. Love it. Hate it. In the lobby of the venue hung a huge poster depicting two small kids celebrating a birthday (the consummate marker for the passage of time). The set was a sandpit surrounded by boxed wooden seating, like an old theatre or a bullring. Centre stage, a huge metal pendulum oscillated relentlessly, ominously grinding. By way of sweetness-and-light contrast, there were models wearing babydolls, and shirred gingham smocks, and MON PETIT CHOU embroidered on a tiny pink mohair sweater. There were boys in shrunken jackets and shorts, like the very first day of boarding school. There was also a boy in a powder blue princess coat, and someone else with Little Lord Fauntleroy britches in the same shade. There were jeans with the knees out from over-vigorous playtime, and bunnykins and chickadee patches. “We use the word ‘childish’ in a very negative way,” Michele said. Gender was indiscernible, meaningless anyway because, he added, “in kindergarten, everyone’s on the same footing.”

But was it sweetness and light? Michele contextualised his collection as an assault on the hetero-orthodoxy that convinces young male minds that growing up means an end to dressing up. “An invitation to go back to childhood to learn new ways of being male,” he called his show. “It is possible to learn things again, to use time in a different way.” But subtextually, his presentation was a feast of psychoses. Who can look at a babydoll on a tattoo-ed, cat’s-eyed androgyne without thinking of kinderwhores, especially when Marilyn Manson is howling his takedown of (anything but) Sweet Dreams on the soundtrack? Likewise the schoolboy jacket and shorts reconstituted in black leather. A fetishistic corruption of innocence, perhaps? And it was extraordinary how the saccharine of a pistachio knit dress could be soured by a pair of the bad-girl semi-batwing shades last seen on Cookie Mueller.

The collection’s footwear of choice was a variant of the Mary Jane sandal. Kids used to wear something similar to school (I know I did.) Michele said he’d always wished he was wearing Clark’s. The T-shirts (“If I want to say something, I use T-shirts,” the designer offered) blared IMPOTENT, IMPATIENT, THINK and THANK, words borrowed from a collaboration between artist Christopher Wool and writer Richard Hell, who was, in his 70s punk heyday, the poet of the Blank Generation and the inspiration for everything safety-pinned. Now 70, Hell’s presence at the show was testament to Michele’s extraordinary knack for cherrypicking fabulous oddballs from the rushing tide of pop culture. He claimed he met Hell when he was a teenager. How time moves on! “The past is an interesting space,” Michele murmured. “But I don’t cling to it.” He was, he insisted, entirely free of nostalgia. Justifiably so, if the world he sought to recreate was as strange, worn and shrunken as the one he showed us. in the end, he couldn't turn back time because it was a big, shiny , heartless wrecking ball.