Staged in front of the Lido Casino in Venice, the designer’s show was almost homemade — and utterly electric. 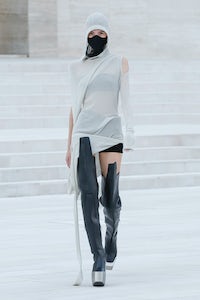 Staged in front of the Lido Casino in Venice, the designer’s show was almost homemade — and utterly electric.

VENICE, Italy — There was something orgiastic, completely liberating, gloriously furious, primaeval and hedonistic to the Rick Owens show which was live streamed today on the usual slot in the Parisian calendar. The show itself happened IRL in Venezia, at the Lido to be precise, in the square facing the Casino, a rather stern, imposing rationalist building the solemnity of which seems completely at odds with the activities once held inside. Oh, well, Owens is a master at extracting energy from opposites.

Control and abandon are the atavistic forces that rule the Owens aesthetic, with explosive results. I attended the show in person, which was one of a kind to say the least: no audience beyond Owen’s close-knit team; the racks of clothing as backdrop and models changing and getting dressed en plein air; tons of smoke as per Owens’ show-making proclivities; a throbbing remix of Donna Summer’s “I Feel Love” as a soundtrack which due to copyright constraints won’t make it to the YouTube video. It all had the air, and the electric charge, of an impromptu, guerrilla-style outing, and it emitted a deep feeling of connection and familiarity: you can clearly feel Owens does what he does, apart from his obvious talent, because of the energy and connection of those that surround him.

Back to the clothes, and the show. The intimidating austerity of the architectural surroundings made for a stark contrast with the chaotic, frenzied quality of the collection, which featured tons of the usual black, but opened in a lurid shade of almost neon pink. It was a blast of scissored, shouldered, layered, spliced, knotted, frayed forms, held together by Owens proverbial control freak hand when it comes to construction. Models looked like glamorous survivors of a brutal clash, dance-floor warriors, hedonistic banshees, nightclubbing maenads: menacing, powerful and out of control.

Once, Owens was a goth, but the older he gets, the more nuanced and rich his aesthetic becomes. There are echoes of other Mediterranean and southern cultures, but the traces are never literal, nor easy to pinpoint. That’s what happens in truly creative minds: alteration, transfiguration. Quarantine was good for Mr Owens, that’s for sure. The show was tiny and almost homemade, but it was a bomb. Crises, after all, are wonderful opportunities, if one knows how to catch them. Rick Owens did.