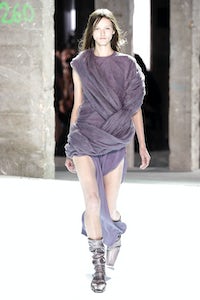 PARIS, France — Daintiness! Did you ever expect to hear Rick Owens utter that word in connection with his clothes? Nothing about their ceremonial aspect and majestic volumes could be construed as dainty. Still, Owens was keen to emphasise the fragility of the collection he showed today.

He said I’d know what he meant when I’d seen the show. And he was right. As much as the Sudanese model Grace Bol looked like a imperious black-clad priestess from any of Owens’ past rituals, all-powerful in her draped flou, there were other women in tops radiating with glass bugle beads made for Owens on the Venetian island of Murano, or swathed in capes made of thousands of ostrich feathers knotted together and mounted on silk gazar.

Owens called them “fog coats,” appropriate given the floating wisps of feather that drifted while the models walked. They were so extravagantly ethereal that words like dainty and fragile scarcely seemed adequate. The beads and feathers were also one of the Californian-born designer’s purest expressions of his reverence for the glamour of old Hollywood, when designers like Adrian and Travis Banton dressed the goddesses of the screen and George Hurrell made their portraits.

“Confection” was another word Owens was partial to this season, but that didn’t really do justice either. He wanted to convey the quality of the fabric woven from the hairs of a horse’s tail that he used for his big bomber jackets. He claimed it was brittle, like spun sugar. It certainly didn’t look frail. (Besides, would you want your windbreaker shattering when someone knocked you on the subway?)
But there was, in fact, an acid sweetness to Owens’ new collection. He’d never used so much colour: shades of lilac, silver, ivory and rust. And yellow, like Dries Van Noten on Wednesday, the same intense, decadent Yellow Book shade too. Amidst the spectacular drapes and folds — with their internal logic that only he is party to — there were aerodynamic flights of translucent fabric, angelic capes-cum-wings.

There was also a girlishness in the short-skirt-and-boots combinations. Owens said he was thinking about the gorgeous free spirits — glowing with health and physicality — who used to come down from the school in the hills above his hometown. Innocence and experience: those are the poles around which Owens’ work has often rotated, but there was a new purity in the vision he offered today. The show was called Walrus (like his men’s show in June) but here that title felt less a reference to a giant, antediluvian tusker than it did a nod to the Beatles’ song I Am the Walrus, written under the influence of psychedelic substances and the particular clarity that comes with them.

Even so, it was less visionary optimism than Owens’ own melancholy that infused the collection. He thinks in sweeps of time as grand as the drapes of fabric that encase his models. Eternity, in fact. And it’s closing in on him. So every collection is a bulwark. This one was his most beautiful.