“I needed to provide what nobody else can offer except me,” said the designer.

“I needed to provide what nobody else can offer except me,” said the designer.

PARIS — Rick Owens spent the pandemic showing his collections virtually, elementally, from the Lido in Venice, his home base outside Paris. “I felt I came up with an honourable response to a bad situation,” he said. “Defiance in the face of adversity.” Then he spent the season past in a well-deserved rondelay of sunlit bliss. “The Summer of Yes,” he called it. “I don’t know if I’ll ever repeat anything that intense.” Did it filter into the collection he showed on Thursday? “Probably, but more as a cautionary tale.”

Still, the Summer of Yes surely armed Owens for his return to the Paris catwalk. He imagined everyone else coming back primed to the gills, ready to show they were unbowed by the End of Days. “I mean, it’s a business, that makes sense, but it made me nervous,” he admitted. “I was thinking, well, we’ll have to do that too, because sensitivity and humility is just going to be weak in the brutal scheme of things.” So what was Rick’s response? Simple answer: it was STUPENDOUS! 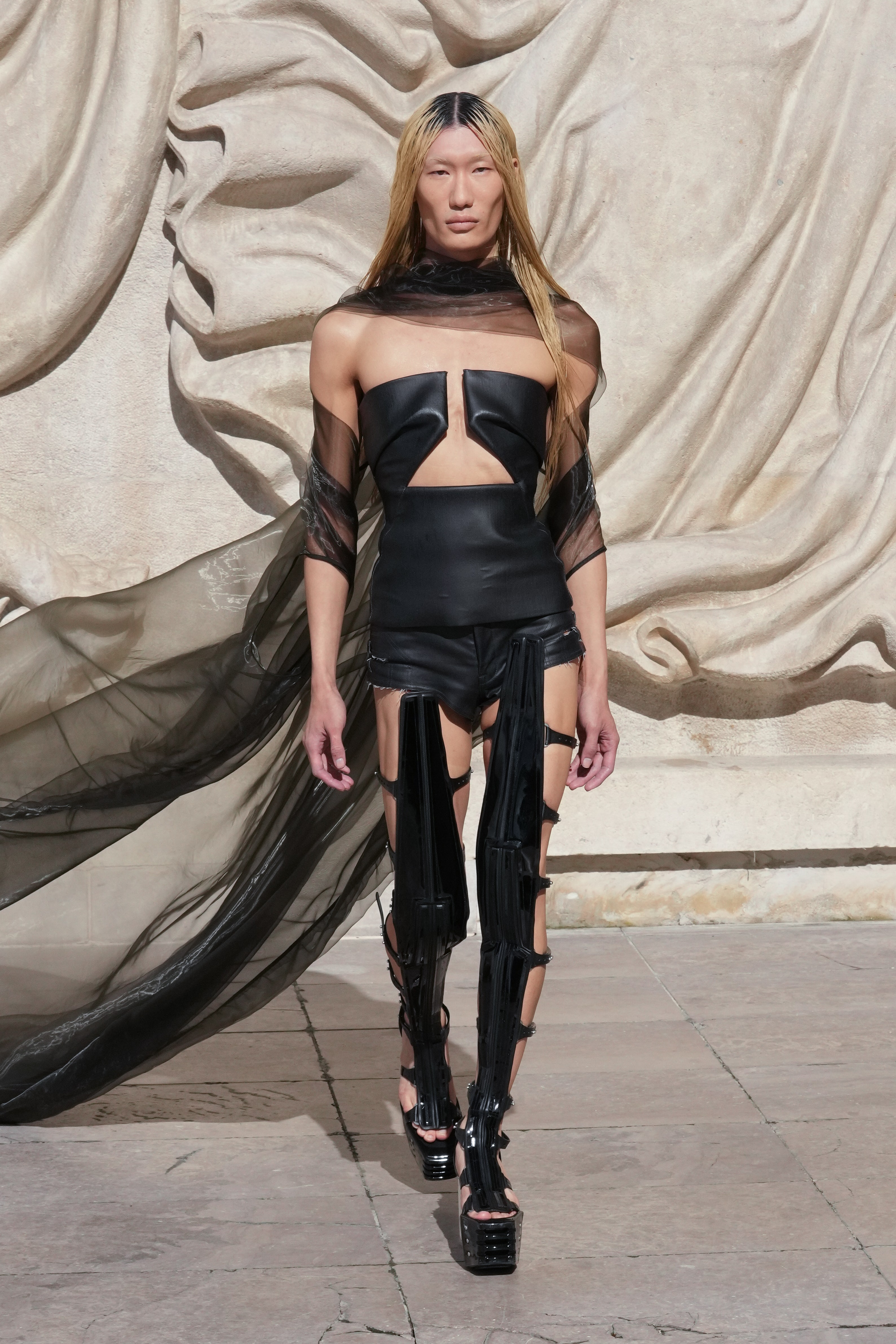 He called it “Fogachine” after his last show on the Lido when his models walked with all sizes of fog machines spewing a light disco mist. Here, back in the courtyard of the Palais de Tokyo, huge apocalyptic clouds of fog were chuffed into the bright blue midday sky. The effect was D.W. Griffith Babylonian, made more so by the two Handmaidens of Rick who cast jasmine leaves from high atop the monumental walls of the building onto the models walking far below. (Owens had paid a fee so that they could pose against the massive Art Deco bas relief designed by Alfred Janniot for the Paris Exposition of 1937.) My guts shuddered to the stentorian beats of Mochipet’s “Godzillafather.” Now that’s something a digital simulacrum can never provide.

In light of the restrictions and uncertainties of the past 20 months, Owens felt his mission was clear. “I needed to provide what nobody else can offer except me,” he declared. “I wanted to make sure that each one of those outfits was a Rick Owens outfit. I tried to make things very, very rich, the best that I can do. Shapes that are rough but classical and sculptural and graphic, in my personal handwriting.”

One embodiment of that were the spiderwebs of mohair which draped and clung like a Jean Harlow gown, reminders that alt-Hollywood glamour is an Owens tentpole. There were also those selfsame gowns in chiffon, Morticia Addams in silhouette, trailing away in bias-cut fishtails. Some of them were swathed in square-shouldered jackets of ombré-ed, ruched chiffon that were so gaggingly gorgeous you could imagine long-gone Hollywood vedettes rising from their graves, reanimated by the pursuit of such beauty.

But one wonder of Owens (there are at least six more) is that such outfits felt as much a precursor of things to come as they did an echo of things past. That was because they shared his catwalk with looks whose confrontational modernity reflected Owens’s other Californian roots, in Rudi Gernreich’s boundary-shattering provocations. Sure, the cutaway bodysuits that Rick showed on Thursday seemed to be in keeping with Spring 2022′s peek-a-boo fixation, but they were carved into stark sculptural forms, folded down like a loincloth, paired with strappy, thigh-high boots. They were the latest manifestations of the perspex-heeled, platformed confections (“Kiss Boots” in the Owens lexicon, after the Larry-LeGaspi-dressed band) which have acquired an ardent cult following. And they loaned the models the formidable stance of a female warrior, amplified by the particularly striking model casting. If it was a response to the pandemic, the aggressive sensuality felt new for Owens. “Maybe I’ve leaned into that a little in my later years,” he acknowledged, with a hint of the tongue in cheek that is one of his verbal signatures.

“How do we seize the moment, taking responsibility and gratitude into account instead of just focusing on entitlement?” he wondered while we were talking, strips of fog drifting hither and yon. You come to Rick Owens for a challenge like that. “My motto has always been that none of us is entitled to happiness,” he offered, while I was trying to think of my own answer. “We need to be grateful for whatever happiness we get.” The pause was pregnant. “So I’m trying to provide a little bit of happiness.” The spell cast by the Summer of Yes lingered on.