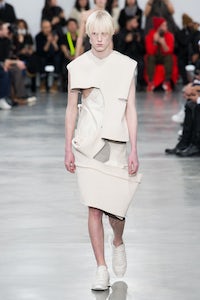 PARIS, France — The mesmerising Subhuman Inhuman Superhuman retrospective currently on show in the Triennale in Milan gave Rick Owens a rare and precious opportunity to shape his own history into a coherent whole for posterity. Write his own epitaph, basically. He thought it was a wonderful experience. Of course, it ain’t over yet, and that’s where things have got tricky. If Owens was able to create an illusion of consistency, of steady progression towards a state of blissful serenity — which was instinctively reflected in the nature of his collections — he is now confronted by the intrusion of rude, brutal reality. And he’s mad as hell. Equanimity out the window. “Shouldn’t I have learned how to control my anger and frustration?” Owens wondered before his show on Thursday. “Shouldn’t I be more serene by now? I’ve been talking about it forever and look where I am.”

OK, let’s look. Owens’s anger has been sparked by the banal way in which cycles of conservatism are repeating themselves, with consequent human cost. As the least conservative of designers, his reaction is understandable. He hates being pessimistic. He attempts a rationalization: without evil, there’d be no good. “But I don’t know what to do with that information.”

So what he does is try to create his way out of the cul-de-sac: the positivity of human endeavour balancing the negativity of human inclination. And maybe when Owens finds balance, there’ll be transcendence. Or, at the very least, hope. Which brought us to ‘Sisyphus’, his new collection, named for the man of Greek myth who was damned for eternity by the gods to roll a huge rock up a hill only for it to roll back down once he’d reached the top. So he had to do it all over again. If Owens had found a perfect metaphor for his frustration, he’d also isolated the challenge he himself had to master: doing it all again in a way that mattered.

Maybe it was the anger that loaned the collection its apocalyptic edge. Slashed garments are not uncommon in an Owens collection, but here the slashes gaped, like wounds. Structure was unpicked, ragged. Plastic shearling filaments formed a toxic haze around the clothes. Their aural equivalent was a remix of DJ Speedlap, furious techno from Rotterdam, the city where old synthesisers go to die in a blaze of earbleeding glory.

It has always been the Owens way to find beauty in darkness, order in chaos, and even, in the last reckoning, some humour. In this collection, structure reasserted itself in the coats and capes (and items that combined the two). They were worn by men painted a ghostly white, like spectres from a Japanese ghost story. On their bald pates were plastered ridiculous tufts of hair. “It’s a confection,” Owens offered. “If you’re going to be angry, you have to put a cherry on top.”