If Peter Dundas' return to Cavalli has been rocky, the man still projects the confidence to reclaim what was once his. 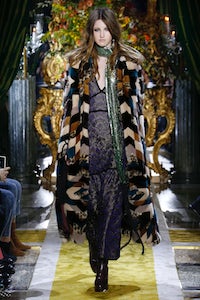 If Peter Dundas' return to Cavalli has been rocky, the man still projects the confidence to reclaim what was once his.

MILAN, Italy — Peter Dundas comes from the land of the ice and snow, so he has always been simpatico with the Norse myth-mongering of rock gods like Robert Plant, the spirit of whose band Led Zeppelin hung heavy over the Roberto Cavalli catwalk on Wednesday night.

Dundas also drew on the style of the women who hung round Led Zepp during their carnal reign over the Sunset Strip in the 1970s. You could picture the girl in the patchworked jeans, the cropped black velvet jacket trimmed with leopard and the python platforms hissing, “I’m with the band,” as she made her way upstairs, past security, to the inner sanctum of the Continental Hyatt House. The narrow-shouldered, floor-sweeping coats were also very period.

The notoriously demonic Page was fixated on the magician Aleister Crowley. Dundas showed models wearing not much more than webs of crystal, a vision of Crowley’s ethereal Moonchild. But Page and his peers also wanted the world to know they were cultured creatures, so they collected things, with a particular predilection for Art Nouveau (it looked really good when you were off your face). So that was another layer for Dundas. He duplicated the golden surface of Gustav Klimt’s art in gilded lace and lacquered silk. The dreamy lassitude of the women in Alphonse Mucha’s pictures was echoed in swirly, floating chiffons.

But what Dundas really does best is conjure up an empowered rock chick ready to stomp her man into submission. (There were, in fact, males on the Cavalli catwalk, but they were boyish mop-heads, not likely to cause the women any bother.) And he has clearly done just that to his self-doubts.

If his return to Cavalli was rocky, the invitation now reads, “Peter Dundas requests the pleasure of your company.” That's a man with the confidence to reclaim what was once his, in everything but name. 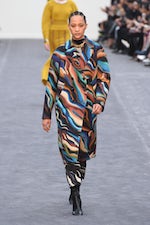 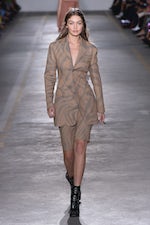 A Palette of Sand and Spice at Cavalli 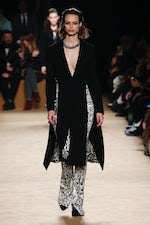 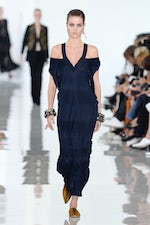 Sensuality, Not Sexiness at Roberto Cavalli