The designer’s shift to Italian production has brought her designs to a new level. 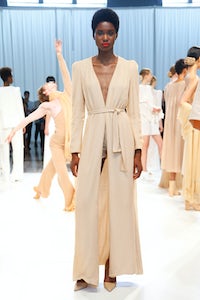 The designer’s shift to Italian production has brought her designs to a new level.

The Upstate New York-based designer has moved a good deal of her production from Nepal to Italy, where it’s possible to turn out elegant pieces like a puffed-sleeve cashmere jumper in a loose jersey knit, crepe high-waist trousers and a silk-knit cardigan floating inside two layers of organza. There, she is also producing leather square-heel pumps and sleek-but-sturdy belts in the same factories used by big-time brands like Chloé.

If there was ever an heir apparent sensibility-wise to Donna Karan, it might be Roche. Wearing a crepe black blazer and a sand-coloured sweater dress of her own design, Roche, and her clothes, exuded the quiet power Karan has championed.