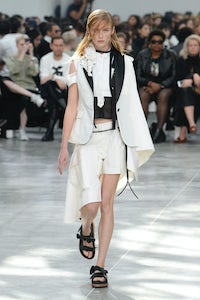 PARIS, France — Loving Sacai is a little like carrying a torch for your favourite band. Where others see a slide into formula, you see only the evolution of much-loved signatures. And so it was with Chitose Abe’s latest expression of her fascination with hybrid forms.

Her career has taken on something of a rhythm: advance one season, consolidate the next. The seasons where she advances are the ones where she swirls her hybrids into outfits of gloriously bemusing fantasy. When she consolidates, function tends to rule. Although it’s scarcely function as we know it when we’re looking at a tuxedo jacket sliding sideways into a cape and a trenchcoat with grommeting detail, which was more or less the first look in her latest show. There may have been shorts involved too.

The trenchcoat was a running theme. Bits and pieces of it appeared here and there as a sleeve, a stormflap, a collar. It was a constant reminder of another motif, the utility-wear that cropped up as worn denims or fishermen’s vests. One of these sprouted lace and topped a swathe of plissé skirt, one of the most graphic illustrations of the hard/soft, masculine/feminine dichotomy that loans Abe’s hybrids their edge and, more often than not, their accessibility.

She continued her exploration of the vertical hybrid in this collection, which meant fierce asymmetry, particularly striking in a coat which ingeniously treated the same plaid three ways, starting with sturdy cotton on one side, falling away in sheer scarf points on the other.

Maybe it’s a technique whose challenge has been diluted by familiarity, which might be what the Sacai doubters mean when they talk about formula, but that doesn’t alter the fact that it makes clothes move in a particularly alluring way. And just plain pretty as well, as when Abe reconfigured her skewed plissés in a vintage floral print by Henri Kvasnevski.