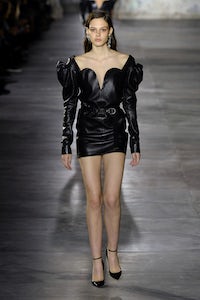 PARIS, France — “A clin d’oeil, a wink,” was Anthony Vaccarello’s description of his debut at Saint Laurent on Monday night. He wanted to lighten the legacy he’s inherited. “It’s heavy,” he said. “Everyone has their own interpretation, and I know I can’t please everyone. But neither could Yves.”

Or, he might have added, the handful of designers who have carried the torch since Saint Laurent’s retirement in 2002: Alber Elbaz, Tom Ford, Stefano Pilati and, most controversially, Hedi Slimane, who has left Vaccarello with a billion-dollar business to sustain. Vaccarello insisted they’d all inspired him in some way, if only because their work for the house consolidated just how strong its design DNA was.

That point was underscored by the massive neon YSL dangling from an equally enormous crane over the heads of guests arriving at the show. Clearly heavy, but also all about light.

And that’s how Vaccarello found himself using materials he insisted were not at all him: fil coupé, lace, velvet, a gilded leopard. Not him, but definitely Yves. Same with the single leg’o’mutton sleeve that was one of the collection’s dominant motifs. Vaccarello was obsessed with a YSL dress from 1982. Which is where he got the sleeve — and the leopard. Only later did he see that dress hanging next to Saint Laurent’s office. So, some sort of Kismet then, confirmed by the statement by Kering chief executive Francois-Henri Pinault during the post-show dinner, that it had only ever been Vaccarello in the running as management’s choice to fill Slimane’s king-size shoes.

Given the extremely narrowcast nature of Vaccarello’s own collections (now suspended so he can focus on Saint Laurent), eyebrows were raised when he got the job. Yves Saint Laurent has proved a deep well. Was the young Italian-Belgian capable of doing justice to those depths?

Under a mirrored ceiling in the under-renovation building that will soon be the new YSL headquarters, the collection he showed was tightly edited to the point of numbness in its almost-all-black parade of leather and legs and lamé and puff sleeves and sweetheart necklines and breast-baring transparency, Yves’ own classic accompaniment to his 'Le Smoking'. (Equal opportunity see-through saw the sole male in the show also wearing a sheer chiffon blouse.)

Post-show, he named Yves as his greatest inspiration. Vaccarello said all the YSL classics — caban, trench, marinière and so on — were back in the showroom waiting to flex their commercial muscle, but for his first show, he didn’t want to go that route. “I wanted to focus on design, not styling,” he added, in what was possibly a pointed riposte to the Slimane years.

That tight focus yielded a vision as narrowcast as the one that shaped his own collections (it also allowed him to incorporate a couple of his own signatures — the leather, the micro-skirt). "I was careful to not be crazy," Vaccarello said.  So, for all the sex-bomb-on-a-short-fuse hot stuff, the collection actually came across as quite cautious.

But, he suggested that each new season would bring another reveal; emphasise another element of Saint Laurent’s incredibly rich design vocabulary. In doing that, he will be following in the footsteps of his predecessors at the house, all of them kids in the YSL candy shop. You could feel it happening here already in little details like the tasselled earrings, evoking YSL’s fabulous Chinoiserie, or the tuxedo onesie with the 1940s shoulder line. So we can mark up this debut as a promising start.