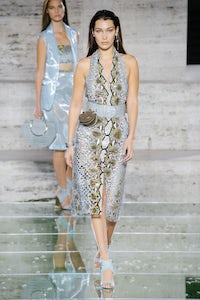 MILAN, Italy —The Salvatore Ferragamo woman is having a bit of an identity crisis. Whereas once she was graceful, pretty and demure, and maybe even a tad stiff, she's now increasingly becoming a supervixen. Whereas her idea of luxury was once subdued with just a tiny bit of eccentricity, now it's all about boldness and ostentation. It was time to move on probably, but for the moment we are just halfway through the transition, which explains the bumpiness of the road.

There were a lot of super-precious skins in today's show, dyed in almost psychedelic colours. Creative director Fulvio Rigoni was in a colourful mood, in fact, upping, so to speak, the temperature of the collection. This is his third outing for the Florentine house, and probably his most assured. Rigoni's woman let go of the coldness of the past, and finally became more sensual.

The satin dresses tied at the back had an Halston kind of vibe and exuded sexy abandon. The tailoring, by contrast, was sculptural and seductive, but a bit stiff. Rigoni's effort to test more feminine grounds was a good move, but the collection lacked coherence. Which is not a problem that's unique to Ferragamo. Most of the collections we are seeing on the runway at present are about single pieces more than the whole. That makes things easier to sell, probably, but also less engaging to watch.